The lost city of night, also known as the Night Kingdom, is an ancient city that was inhabited by the NightWing tribe during the era of Darkstalker. It is located south of the Kingdom of Sand, on a peninsula known as the Talon Peninsula.

The city was abandoned soon after Darkstalker publicly murdered Arctic, and was therefore quickly forgotten. For thousands of years, the majority of its landscape slowly sank into the ocean. It did not appear on any known Pyrrhian maps, and was only rediscovered when Darkstalker reinhabited it during the events of Darkness of Dragons. It was then re-abandoned, and is currently uninhabited.

The kingdom's terrain consists of a vast landscape caverns and ravines, glowing with firelight and echoing with the flutter of wings.[1] There are secret canyons and caves carved into the rock all across the terrain, some of them stretching towards the distant sea.[2] The kingdom is surrounded by a series of sharp-edged mountains known to the IceWings as Darkstalker's Teeth.[3]

The bottom of the cliffs contained rivers and spaces for the lesser NightWing homes. The richer or more influential NightWing structures were built higher and are more skylit, closer to the stars. The terrain is quite rocky, with canyons and outcroppings.[4] Caves delve deep into the mountains, and the coast is lined with rocky black-sand beaches and littered with tide pools and half-flooded caves.[5] There are also dragon-made lakes and dragon-planted forests.[6]

In modern Pyrrhia, the peninsula has become considerably smaller, damaged by earthquakes, avalanches, and tidal waves.[7] Darkstalker began rebuilding the city with his animus magic before being transformed into Peacemaker.[3] During its brief inhabitance by the modern NightWing tribe, firelight dotted the kingdom.[8]

On the edge of the cliffs, there is empty space where the land dropped sharply below them, veering down into a long rocky beach.[9] It contains an enormous cave[10] whose interior is a world of emerald green and vaulted ceilings. Phosphorescent moss and algae clings to the rocks and walls and stalactites, giving the cave an eerie glow that was matched by chandeliers of glowworms up above. Water dripped softly, and a rivulet ran through the cave, connecting some tide pools and circumventing others. The cave became warmer and quieter the farther back it went, and there is a tilted ledge of rock above one tide pool containing starfish and anemones.[11] The sound of wind whistling through deep ravines can be heard throughout the kingdom.[12]

Borderland Mountain is the mountain within the lower reaches of the NightWing palace. The area has a forest and a lake.

Clearsight's bedroom contained several scrolls and inkwells, and was quite messy the morning before she attended school. The home includes several rooms, at least one bookshelf, and a front entrance. The structure is built more than halfway down the cliffs of the city. The front entrance is bordered by a ledge, and there is a fireplace within the house.

Darkstalker's home was described to have a pale blue door, which led into a sunlit room adorned with white rugs, glittering crystals, and a couch in the middle. One wall was lined with scrolls tucked into little niches. The kitchen was described to be "impossibly clean" and had tools in it that Clearsight had never seen and could not imagine how to use. There was a fireplace with a painting of the family done by Whiteout on the mantle, the picture painted in shades of blue and making the family appear more related than in real life.

The NightWing school, the NightWing palace, a large museum, and a massive library make up the four corners of the Great Diamond.

The Great Diamond is what the NightWings called the shape formed by the tribe's most important buildings. The palace and school were placed to the north, not far from each other, and the museum and library finished the shape toward the south. The palace was noted to be the largest of the four buildings. These four buildings formed a diamond-shaped plaza, hence its name. There was a temporary stage set up in the middle of the plaza for concerts.

There is a lunar hatching peak somewhere in the city.[13]

A structure neighboring Darkstalker's home was mentioned to have vines around the doorway.[14]

Clearsight was noted to have a study room of her own within the library, inhabited with a blue ink puddle, five tables, and partially blank scrolls. It had a doorway.

The NightWing palace was the center palace for the NightWing tribe and was once inhabited by Queen Vigilance. The palace includes royal suites (one of which Fathom and his bodyguards had stayed in), a throne room, a royal tower, and more. The palace was briefly ruled by Darkstalker when he became king of the NightWings and brought most of his tribe back to the lost city. However, he was soon defeated, and the tribe returned to the Rainforest Kingdom. It is part of the Great Diamond, made up of the palace, a school, a library, and a museum.

The throne room is usually used for Queen Vigilance's parties. It is also the site of fights for enchanted armbands and appears many times in the futures seen by Clearsight and Darkstalker.

There was mentioned to be a royal treasure room somewhere within the palace. The top spire of the palace had a prison set up for special prisoners.

The NightWing school was designed to look very similar to the NightWing palace, with lots of gray and black marble terraces, hanging gardens, and long glittering waterfalls. It has three entrances, and the quietest and least crowded was located on a side facing away from the NightWing palace. Its floors were made of marble tiles.

It contained a library, as well as a vast hexagonal courtyard that was lined with classrooms on all six sides. The courtyard was described as an obstacle course for flying practice, full of trees, twisting vines, loops, mazes, and tricks. The courtyard contains vines with heart-shaped leaves, pine trees, outdoor tables, and puddles.

There is a long waterfall that leads to a pavilion on an upper level to the main office, occupied by Professor Truthfinder. The office contains a desk and piles of paper.

Past the main office, there was a bustling corridor leading to a window that looked inward, towards the courtyard and the other levels of the school. It was surrounded by five towers. Four of these were regular dragon towers, with multiple levels open to the air and with pavilions on top. There are several levels of gardens where dragons gathered to socialize before the beginning of school. There are also places for future-seeing NightWings to practice making prophecies.

North Beach is an expanse of beach at the north end of the Night Kingdom peninsula, rocky and pebbled, unlike the southern shores' smooth sandy beaches. It faced a bay with the Kingdom of Sand on the far side, just out of dragon eyesight but close enough that most NightWings avoided it. There are giant boulders strewn on the beach. It has also been noted that dragons have practiced swimming there.

The lost city of night was mentioned when Moon delivered the Jade Mountain Prophecy. This prophecy contained the lines:

"Jade Mountain will fall beneath thunder and ice

Unless the lost city of night can be found."

The lost city of night was mentioned again in the Jade Mountain Prophecy when Moonwatcher said:

"Jade Mountain will fall beneath thunder and ice,

Unless the lost city of night can be found."

It was also mentioned a couple of times through the book, including when the Jade Winglet visited the Night Kingdom's ruins, mistakenly believing it was the lost city of night.

While Darkstalker was leading the NightWings to the lost city of night, he flew ahead when the other NightWings were sleeping. Turtle stealthily followed him.

When Darkstalker reached the kingdom, he flew into the NightWings' old school. While under his invisibility spell, Turtle places a marble he had found in front of Darkstalker, involving Darkstalker to believe that Clearsight was still alive and trying to tell him something.

The lost city of night was the setting of part of the book. In the city, the Jade Winglet rescued Turtle from Darkstalker and learned that the NightWings were about to start a war against the IceWings. The Jade Winglet then hurried back to Jade Mountain.

The lost city of night on the cover of Darkness of Dragons, by Joy Ang 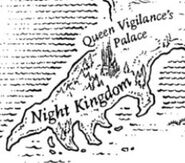 The Night Kingdom on the map of Pyrrhia, by Mike Schley

The lost city of night on the map of Pyrrhia, by Mike Schley

The lost city of night on the colored map of Pyrrhia, by Mike Schley

The Night Kingdom on the colored map of Pyrrhia, by Mike Schley