Wings of Fire Wiki
Register
Don't have an account?
Sign In
Advertisement
in: Characters, Females, SilkWings,
and 11 more
English

"Don't you think it's unfair that HiveWings can use their weapons on us anytime they want, but we can't do anything to fight back?"
— Luna to Blue, The Lost Continent

SilkWing representative on the journey to Pantala

The Hive Queen,
The Dangerous Gift

Luna is a female SilkWing dragonet and the main protagonist of The Flames of Hope.[event 1] She is a flamesilk, and is in a relationship with Swordtail. She is currently flying across the sea from Pyrrhia towards Pantala as one of the eleven selected representatives.

Luna has pale,[1] pearly,[2] bright green scales[1] of an elegant caterpillar color[3] that are lined with golden flecks along her back and tail.[4] Before her Metamorphosis, she had whorls of cobalt and gold in her wingbuds.[5] She now has pale green wings[6] that look beautiful, like cascading petals of green sunlight.[7] She has long, furling antennae and scales like sliced gems.[8] From afar, she appears as a pale green shape with bits of white, gold, and blue.[9]

Before her Metamorphosis, Luna had always felt ready for life with wings and the change that would come with them.[10] Blue considers her to be the smartest dragon in their family.[5] She is reckless,[11] unworried,[12] fierce,[13] bubbly,[14] and cheerful.[15] She yearns for change and independence, and is aware of how unfairly the SilkWings are treated. She is often difficult and impertinent towards dragons she dislikes,[16] and it is unlike her to apologize to authority[17]. Sundew describes Luna as great[18], gives off a survivor vibe, and able to take care of herself.[19] However, like her brother, she does think and care about how her actions would affect other dragons, such as when Chafer hurried Blue and Luna out of a candy store in Cicada Hive, Luna gave a pair of scales for their honey drops despite Chafer telling them to simply leave.[20] She cares about dragons who are in danger,[21] and she is not easily frightened.[8] Moonwatcher noted that Luna's mind is somehow more entangling than other dragons, and that she is slightly intense.[8]

Despite having very different personalities, Luna is shown to love and care about her half-brother. On Luna's Metamorphosis Day, Blue is the dragon that she chose to spend her time with. It is implied that the two often roamed Cicada Hive together and were familiar with its market. However, she is quite often frustrated by him being content with following the rules and not wanting to rebel against the HiveWings. She also notices almost right away how much Blue had changed during the time she was in her Cocoon, saying, "Wow, […] It really was a long five days, wasn't it?" When Luna emerged from her Metamorphosis in the Flamesilk Cavern, Blue cried with joy because he had missed her very much.[22] She is affectionate towards him[23][24] and has always been able to read him.[25]

Jerboa III is the first dragon Luna met when she came to Pyrrhia. The two dragons express a neutral relationship; Jerboa also helped Luna when she was wounded, so Luna sees her as a friend.[26]

Luna seems to be closer to Moon than other Pyrrhian dragons. She seemed thrilled to learn about Moon's ability to see the future, and believes Moon is the secret weapon the SilkWings and LeafWings need to destroy the HiveWings. She got very excited when she first saw Moon, thinking she was Clearsight. She does not know about Moon's mind-reading.

Luna is in a relationship with Swordtail and is shown to care a lot about him. Swordtail loves her,[17] and when HiveWing guards took Luna away during her Metamorphosis, he vaulted towards her and tried to protect her.[27] When Swordtail met Luna before her Metamorphosis, she leaned into him as though she had been flying for days and Swordtail was the island she had been searching for.[28] Blue believes that Swordtail puts dangerous ideas in Luna's head,[29] but Luna claims that she is the one who introduces the ideas to Swordtail.[30] The pair is devastated when they are separated.

"Don't you 'actually' me. I'm your older sister and I've been to, like, twelve Metamorphosis days, plus I have the highest grade in our class in Silk Studies. I can 'actually' you under the table."
― to Blue (The Lost Continent, page 4-5)

"Pffft. What Tussock's uncle saw was just a green SilkWing. He's just hysterical. And that collapse was obviously just shoddy workmanship. The sabotage story was so obviously a cover-up."
― on the topic of LeafWings (The Lost Continent, page 12)

"To terrorize their enemies! Moons, I sure would. If I had super stink powers, I'd have blasted that Weevil guy right in the snout the moment he got anywhere near our wingbuds! Oooo, that would have been awesome."
― to Blue about Scarab's HiveWing ability (The Lost Continent, page 16)

"Blue, don't you think it's unfair that HiveWings can use their weapons on us anytime they want, but we can't do anything to fight back?"
― to Blue (The Lost Continent, page 26)

"I am not spending my perfect last day being prodded by some HiveWing who thinks we are all weird and revolting anyway!"
― to Blue about seeing a doctor (The Lost Continent, page 28)

"Of course you did. […] You have faith in other dragons. Whereas I thought she was a conniving manipulator who deliberately set up her descendants to be the most powerful tribe in Pantala."
― to Blue about Clearsight (The Lost Continent, page 285)

"We're coming for you, Queen Wasp. And now we have a dragon who can really see the future. The reign of the HiveWings is over."
― about Queen Wasp (The Lost Continent, epilogue)

"She can tell us what's going to happen next! She can see everything the HiveWings will do! She can predict Queen Wasp's next move and then the Chrysalis will know how to stop her!"
― thinking about Moonwatcher (The Hive Queen, prologue)

"My name means 'moon' in the old language, did you know that? Now it's a kind of moth."
― to Moonwatcher, about the similarities between their names. (The Hive Queen, prologue)

"I'm so ready! If you know how to cross the ocean, I'll do it right now!"
― to Sundew and Willow, about saving Blue and Swordtail. (The Dangerous Gift, page 85) 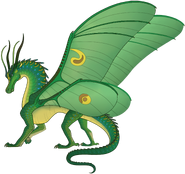 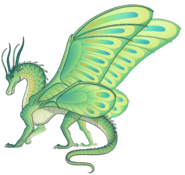 Luna on the cover of The Flames of Hope, by Joy Ang