Wings of Fire Wiki
Register
Don't have an account?
Sign In
in: Characters, Females, RainWings,
and 7 more
English

"Magnificent's main problem is that she's forgetful. She can never remember what she's agreed to do or what's going on in the tribe or who asked her for what, and she doesn't really care."
— Kinkajou about Magnificent, The Hidden Kingdom

Alive (as of The Hidden Kingdom)

Magnificent has green eyes that are friendly and a little sleepy-looking.[1] She is as large as Coral and is adorned with several garlands of white dragonfly-wing flowers.[2] During the RainWing Royal Challenge, her scales were purple with scalloped gold etching each scale.[3] She usually has magenta scales and purple wings.[4]

Magnificent reflects RainWing stereotypes, as she is careless, selfish, and lazy. Kinkajou also described her as being forgetful, saying that "She could never remember what she agreed to do or what was going on in the tribe or who asked for what, and she doesn't really care."[5] She had little concern for the fact that several of her subjects were being kidnapped and tortured during her reign, and making no efforts to rescue them even when she was frequently reminded of their disappearances by Mangrove. When Glory agreed to help Mangrove find the missing RainWings, she was only relieved that Mangrove would stop mentioning their disappearances.[6]

Although lazy and incompetent as a ruler, Magnificent took great care to ensure her success in the RainWing Royal Challenge. As an ambitious queen, she had planned several setups before the challenge, and even when she was accused of cheating with clear evidence, she refused to admit what she had done. She was very defensive of her title, although she neglected her duties. She is easily irritated, and snapped at her fellow queen, Exquisite, for referring to her as "Aunt Maggie."[7]

"And don't forget to report back to me on that investigation, […] It'll be nice to have something to make Mangrove go away. What's your name, anyhow?"
― to Glory about the investigation of the missing RainWings (The Hidden Kingdom, page 67)

"Oh, […] Marvelous! I'm so pleased. Do go tell Mangrove. It'll be so nice not to have to deal with that headache anymore."
― to Glory while discussing a rescue mission for the captured RainWings (The Hidden Kingdom, page 215)

"It's only a few dragons, […] Right? Five or six?"
― to Glory while discussing a rescue mission for the captured RainWings (The Hidden Kingdom, page 216)

"Too late, […] That's who she chose. Someone give Tamarin a shove in the right direction."
― to Kinkajou when Glory chooses Tamarin (The Hidden Kingdom, page 256)

"Stop calling me that. I'm nobody's auntie. Certainly not to a bunch of sloths. And this isn't just for me, you big furhead. It's your throne too."
― to Ex-Queen Exquisite (The Hidden Kingdom, page 264)

Magnificent from The Hidden Kingdom (graphic novel), by Mike Holmes 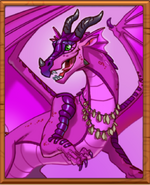 Magnificent's icon from Speed Wings, a game on Scholastic HomeBase
Art by Mike Holmes, from the Wings of Fire Graphic Novels