Wings of Fire Wiki
Register
Don't have an account?
Sign In
in: Characters, HiveWings, Males,
and 4 more
English

"Malachite. My secretary, back when I was still allegedly the minister of education. Brilliant, talented, made excellent coffee, full of exciting ideas. The first dragon in years who gave me hope for the future of our tribe."
— Scarab to Cricket about Malachite, The Hive Queen

Malachite is an adult male HiveWing who was first mentioned in The Hive Queen. Formerly Lady Scarab's secretary, Malachite is now under the control of Queen Wasp and is forced to work for her in Wasp Hive. He is the former partner of Katydid and the father of Cricket.

Malachite has warm orange scales. He has dark red wings with black spots here and there, some of which resemble Cricket's inkblot scales. He has kind eyes and wears glasses.[1]

Before becoming enslaved by Wasp, Malachite was a kindhearted individual who had several good ideas for his tribe's welfare. Scarab describes him as brilliant, able to make excellent coffee, and full of exciting ideas.[2]

After Scarab confessed that Cricket's true mother was Katydid, she showed Cricket an old book and opened its front cover, revealing a hollow space that held a small portrait of Malachite holding a book. Scarab explained that Malachite formerly worked under her when she served as minister of education. After discovering that Scarab was quite fond of him, Wasp forbade him from marrying Katydid, knowing full well it would upset Scarab.

Malachite was mentioned briefly through Inchworm while he was under Wasp's mind control. When Wasp heard about Cricket's residence, she invited her to come back to see her father, but then threatened her by saying she could easily kill him as well. 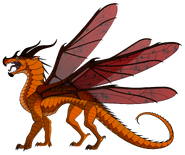