Wings of Fire Wiki
Register
Don't have an account?
Sign In
Advertisement
in: Characters, Males, NightWings,
and 9 more
English

"We have only one freshwater source on the island, and it's become rather contaminated with ash over the last few years, so I invented this magnificent contraption to provide safe water for the entire tribe…"
— Mastermind to Starflight about one of his inventions, The Dark Secret

Alive (as of Talons of Power)

Mastermind is an adult male NightWing who was introduced in The Dark Secret. Before the events of the NightWing Exodus, he lived on the NightWing island and served as a scientist for his tribe. He currently resides in the Rainforest Kingdom, where he is imprisoned for his crimes against the RainWings. He is the father of Starflight.

Mastermind has black scales and curious, bloodshot eyes.[1] The silver scale patterns on the underside of his wing membranes spray outward, like a splash of water,[2] similar to Starflight's. He is whip-thin, and his snout is pockmarked with small scars.[1]

Mastermind is highly intelligent. He is passionately devoted to science and seems to care greatly about Starflight. Like his son, he has a tendency to use a wide and complex vocabulary. He gets nervous in difficult situations, such as when Battlewinner left her lava pool before her armor was complete, leading to her death. Mastermind was loyal to his tribe and was willing to follow the queen's orders. However, Mastermind did not have any intentions to torture the RainWings — he intended to create a defense to RainWing venom, and expand dragon knowledge for the purpose of science, as well as following the queen's orders. However, he seemed to believe that RainWings were inferior, barely considering them dragons, which explained his lack of remorse in their imprisonment and kidnapping. He is somewhat similar to Starflight and Cricket, as both are devoted to science. Unlike them, however, he seems to lack the critical thinking skills to question his orders and lacks both the moral compass and empathy that restraints him from experimenting on living creatures. Despite being willing to experiment on the RainWings, he was quite friendly when he met Starflight showing that he cares about his son. He uses large vocabulary, so elaborate to the extent that other dragons sometimes cannot understand him. He is obsessive about keeping others from touching his things.[3]

Farsight was Mastermind's partner. They seemed to like each other, but otherwise, they did not interact much.

When Mastermind first met Starflight, he was overjoyed and happy, finding out that they have a lot in common. Starflight was also very enthusiastic, and Mastermind thought he would be a great lab assistant. However, when he showed his son the RainWing experiments, Starflight lost all interest, being disgusted at his father. However, Mastermind did not seem to notice. It is unknown what their relationship is currently, or if Mastermind is now aware of his son's true feelings of him.

Strongwings was once Mastermind's lab assistant. Mastermind immensely disliked him because he was big and clumsy, knocking things over and not being on time for work. Strongwings did not wish to be the lab assistant but his parents forced him to.

"No, no! […] I must not be interrupted! This experiment is at a critical juncture! And Greatness says I might be shut down at any moment! Everyone please leave!"
― to Morrowseer, Starflight and Fatespeaker (The Dark Secret, page 47)

"Three moons, […] What a handsome dragonet. He does look like me; I knew he would. As I suspected, his jawline is genetically dominant. […] Ah, and yes, see the way the star scales on our wings spray outward, like a splash of water? Whereas Morrowseer's, for instance, curl inward, more like a snail shell. All theories at this point, of course."
― to Morrowseer, about Starflight (The Dark Secret, page 47-48)

"But I have a son! I, of all dragons! Let's see Strongwings laugh now! Just wait until everyone sees my handsome offspring. […] So strong and healthy! You can be the assistant I've been looking for. What are you interested in, son?"
― to Starflight (The Dark Secret, page 48)

"Fantastic! […] I have lots of scrolls. How about desalinization? Know anything about it?"
― to Starflight (The Dark Secret, page 48)

"Very good, […] We have only one freshwater source on the island, and it's become rather contaminated with ash over the last few years, so I invented this magnificent contraption to provide safe water for the entire tribe…"
― to Starflight (The Dark Secret, page 49)

"Here is where I do all my volcanology, […] I'm testing for materials that can withstand eruptions, and working on scale models of barriers, and outlining possible implementation systems. No wonder I need an assistant, right?"
― to Starflight (The Dark Secret, page 49)

"Not going very well, as you can see! […] Queen Battlewinner isn't pleased about that. Of course, she has her own ideas about where I should be focusing my attention. Come, come!"
― to Starflight (The Dark Secret, page 50)

"Mastermind was our science teacher, and the tribe's resident genius, if you can believe all the hype about him. I say, if he's such a genius, he should be able to explain stuff in a way that dragons can actually understand. Instead he showed up once a week, blathered on for hours using the biggest, most made-up words possible, and then slithered back to his lab, leaving all of us even dumber than we were before."
― Fierceteeth about Mastermind (Prisoners)

"I'm sorry, […] It was… I was just… for science…"
― to the RainWings when they confront him for capturing RainWings and experimenting on them (The Brightest Night, page 7)

"YOU'VE RUINED IT! THE WHOLE THING! OUR ENTIRE TRIBE COULD BE WIPED OUT BECAUSE OF YOUR STUPIDITY!"
― to Strongwings (Prisoners)

"DON'T COME BACK OR I'LL DISSECT YOU ALIVE!"
― to Strongwings (Prisoners)

Reference by Sands of Lost Time 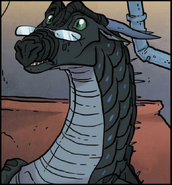