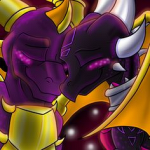 aka The Number 1 Spynder Fan

I have two little pet Stalkers named Crazy and Shrike. They are my pets and like all pets, they love attention. So please give them treats. They like to wander into random conversations. And please don't hurt them, because if you repel them *loads rocket launcher* your gonna have a bad time.

The names Arachnid and I love talking and interacting with people. Sorry I am currently not accepting rp's but I love talking about almost anything. Espacially: Spyro, Skylanders, Youtubers, Random Facts, WOF, Warriors, Bearded Dragon care, Dreams, fanfiction, memes, and much more! Before you go and post something on my wall make sure it follows these rules.

1. No talking about LGBT+ though normally most people allow people to talk about Gay or Lesbian people, I don't it makes me uncomfortable

2. No vandalism or bullying at all

See to rules! Its that easy!