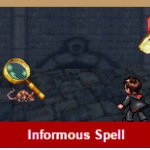 The purple chickens welcome you to my wall! They also realise that this greeting sounds really, really pretentious, but there you go.