Wings of Fire Wiki
Register
Don't have an account?
Sign In
Advertisement
in: Characters, Females, SeaWings,
and 8 more
English

"That's because I have had excellent training at the side of the most wonderful queen in Pyrrhian history."
— Moray to Coral, The Lost Heir

Alive (as of The Lost Heir)

Communication specialist of the SeaWing Council

Moray is an adult female SeaWing who was introduced in The Lost Heir. She serves as Coral's scroll publisher and the Councillor of communications as a member of the SeaWing Council. She currently resides in the Kingdom of the Sea.

Moray is large,[2] with dull gray green scales and small, colorless eyes[3] that closely resemble those of her father, Shark.

Described by Anemone as being "drippy, fatuous, and about as interesting as sea slime," Moray adores Coral and is closely loyal to her. She detested heirs who challenged or could potentially challenge Coral for the throne, as shown in Orca, Anemone, Auklet, and Tsunami.

Moray first appeared to notify Queen Coral of a dead body that had been found near the Summer Palace. The queen showed little interest, yawning, until Moray mentioned it was a SkyWing. Coral ordered Moray to fetch Piranha and Shark, and Moray accompanied them to investigate the body.

The next morning, Moray was present during a council meeting. While Whirlpool described how well Coral's newest scrolls were selling, Moray interrupted by mentioning that the underwater editions, which she spent much of her time promoting, were especially popular. She also mentioned that SeaWing schools had adjusted their curriculums to ensure that dragonets had ample time to read more of Coral's scrolls.

Moray was first mentioned as one of the figures of authority who were able to impose a punishment to the SeaWing princes when they did something wrong. Later, in Turtle's flashback to the Talons of Power ceremony, Moray was shown as one of several SeaWings overseeing the test. She was also the first of the viewers to notice Anemone's newfound animus powers.

Moray seems to almost worship her aunt. She is overtly loyal towards Coral and deeply adores her, and Coral simultaneously trusts Moray. Her willingness to help the queen is evident in The Lost Heir, when she offered to scrub a wounded soldier's blood off of the floor of a pavilion within the Summer Palace, and clean up the mess after Tortoise's public execution.

It is unknown about their relationship, but it is hinted that Moray feels some way about Orca because Anemone warned Tsunami to never say Orca's name around her.[4]

"That's because I have had excellent training at the side of the most wonderful queen in Pyrrhian history."
― to Coral (The Lost Heir, page 93)

"Mostly the underwater editions, […] Those tend to sell the best. of course, I spend all my energy promoting them —"
― to Coral, about her scrolls (The Lost Heir, page 113)

"But everything I do for your scrolls is so terribly important, […] They're like your other children, really. I couldn't abandon them."
― to Coral (The Lost Heir, page 139)

Reference by Skyla the Skywing 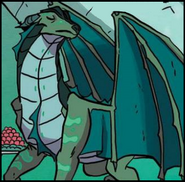