Wings of Fire Wiki
Register
Don't have an account?
Sign In
Advertisement
in: Characters, Males, SilkWings,
and 4 more
English

"I am not interested in wasting time on HiveWings. I want to save SilkWings. There are enough of us to win if we join together and rise up!"
— Morpho to the Jewel Hive Chrysalis, The Hive Queen

Member of the Chrysalis in Jewel Hive

Morpho is a male SilkWing who was introduced in The Hive Queen. He is a member of the Jewel Hive Chrysalis, and the cousin of Cinnabar.

Morpho has blue[1] scales and bright blue wings[2] similar to Blue's. He also has a torso dappled with iridescent sea green scales, and little patches of white dotting his tail.[3] His eyes and antennae are emerald green,[4] and his tail point is blue.[5]

Morpho is impatient, rash, and somewhat insensitive; he blamed Tau's deformed wing for their inability to find better meeting places. Morpho was also readily willing to kill all of the HiveWings in order to help his own tribe, especially after Sundew introduced herself and her plan. Morpho appears to believe that no HiveWing could ever be completely freed from Queen Wasp's ideas, even if they were eventually released from her mind-control, and is suspicious and distrustful of the entire tribe. He is also judgmental, stating that Argus is a "lazy caterpillar,"[6] and wearing an expression of disapproval when mentioning that Temora was too tired to attend their meeting.[7] Morpho has very high standards for SilkWings wishing to join the Chrysalis.[6]

Morpho is a member of the Chrysalis. Morpho was in Jewel Hive's library, arguing with Cinnabar and Tau over the best way to overthrow the HiveWings. Morpho argued that the Chrysalis should work on improving the SilkWing tribe before overthrowing the HiveWings, while Cinnabar and Tau both argued that the SilkWings needed to be focusing on attacking the enemy. After Swordtail introduced himself, Morpho also met Blue and Cricket, although Morpho, Cinnabar, and Tau were understandably wary of Cricket's presence. Morpho was skeptical after Cricket admitted that she wasn't affected by Queen Wasp's mind-control, but stopped arguing after Cricket mentioned that she would have been imprisoned by now if she was vulnerable to the Hive-mind. After Sundew introduced herself, Morpho was very supportive of her plan to wipe out the HiveWings. Their meeting was then interrupted by three HiveWing guards, one of which was being mind-controlled by Wasp. Wasp demanded that her two companions start a bonfire of books in the middle of the library to smoke Morpho and the others out of hiding, but Cinnabar and Tau both revealed themselves to Wasp before the fire was started, with the excuse of spending extra time reading instead of working for Lady Jewel. Cinnabar and Tau were taken away, and Morpho then went home, explaining that his father worried if he was out too late.

"Do you agree that all SilkWings should refuse to serve any HiveWings in the Glitterbazaar? […] And that we should make lists of all the SilkWings who do so we can go yell at them?"
― to Swordtail (The Hive Queen, page 140)

"Is that why you're here? […] Just looking for another SilkWing?"
― to Swordtail when asked about Luna (The Hive Queen, page 141)

"We have to fix the problems in our own tribe before we can stand together. I mean, if I think Argus is a lazy caterpillar who doesn't understand our mission, then it's useful for me to yell at him until he sorts himself out."
― to Cinnabar about scaring Argus away (The Hive Queen, page 136)

"It's not important who's right! Although it was me! But what's important is that there's a HiveWing right here and what are we going to do about it and also it was your fault we couldn't meet at my better suggestions, so there!"
― to Tau (The Hive Queen, page 142)

"But Queen Wasp could, if she wanted to. She just doesn't because she likes to give the Ladies the illusion of control. As long as they think they have their own Hives to run, they'll bow and scrape and let her be the one who's really in charge of everything."
― to Tau about Queen Wasp (The Hive Queen, page 145-146)

"… all the HiveWings have had Queen Wasp in their heads for so long, they can't think for themselves anyway. They'll keep believing her lies, no matter how free you think they are."
― to Cricket about showing HiveWings the truth (The Hive Queen, page 147) 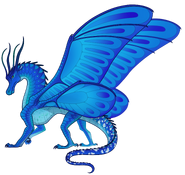