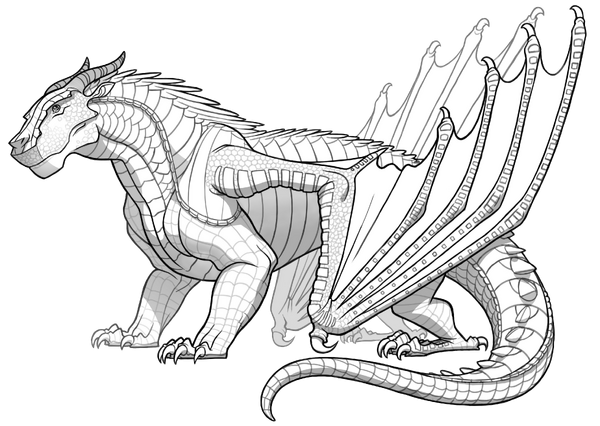 MudWings, also known as swamp dragons or mud dragons to humans, are a Pyrrhian dragon tribe that reside in the Mud Kingdom. They are currently ruled by Queen Moorhen.

The MudWings were allied with Burn and the SkyWings in the War of SandWing Succession and fought against Blister and Blaze. They were allied with Blister and the SeaWings in the beginning of the War of SandWing Succession, until the assassination of Commander Tempest.[1] Burn forced the MudWings into an alliance by using threats and offered a hundred years of peace between their tribes and protection for the MudWings if she became queen of the SandWings.[2]

MudWings have thick, armored scales. They are usually earthy colors, such as browns, ambers, and oranges. They are most known for their flat snouts, brute strength, and large size. They may also have gold or amber underscales, usually more visible in sunlight.[3] Their nostrils are located on the top of the snouts, allowing them to lay submerged in mud for long periods of time, usually around one hour. They have thick, curved horns and broad, flat heads. Their eyes have been described as brown, gold, and amber, sometimes with brownish-yellow rings around the pupils. Their bodies are muscular and robust, being based on crocodiles.[event 1] They are typically larger and stronger than dragons of other tribes. MudWings may also have odd markings such as dappled scales.[4]

MudWings seem willing to eat nearly anything, including both fruit and meat. In the marshes, they eat crocodiles and other swamp-dwelling creatures. They have a bigger appetite than other tribes, possibly because of the energy needed to maintain such large stature. MudWings may have an interest in agriculture or farming.[5]

MudWings can hold their breath for up to an hour. If the dragon is warm enough, they can breathe fire.[6] Thanks to their muscular bodies, MudWings are quite strong. They are capable of camouflaging into mud and dirt and may rest while partially submerged.[7] MudWings can use mud to ease pain and help treat wounds.[8][9]

MudWings that hatch from blood-red eggs are immune to fire. This power only fully activates after exposure to mud. Though fire will still hurt them, any injuries caused by fire will rapidly heal. If a burn is too deep or large, however, it cannot heal all the way; this ability will not heal deep flesh wounds or internal wounds and is mostly limited to a dragon's scales.[10] Fireproof MudWings may be able to survive in lava for short periods.[11] When burned, a fire-immune MudWing's scales will temporarily fade to black before returning to the dragon's normal scale color.[12]

There has never been a known animus dragon in the MudWing tribe.

Less wealthy and lowborn MudWings usually live on the outskirts of MudWing territory, near the Diamond Spray Delta, while the rest live closer to the center of the kingdom.[13] MudWings hatch close to villages, where they learn and pick up the dragon language.[event 2]

MudWings live in large mud bunkhouses, with a big opening at the top, that house several dragons, usually siblings.[14][15] They also tend to lie around and nap in large mud puddles.[7] MudWings also have not been ambitious compared to other tribes. It has been awhile since they had a queen who was interested in conquering others.[event 3]

Pairings are not formal, with a breeding night once a month.[16] Neither parent takes part in raising their children, and often the two partners will not know one another or their children in any way.[17] MudWings lay their eggs in well-protected bunkhouses with mud walls and warm rocks for incubation. Eggs are left mostly alone, and oftentimes no adults are present during hatchings. The first MudWing dragonet to hatch is often the largest and is known as a bigwings. They will help their siblings hatch out of their eggs.[18]

MudWings, unlike other tribes, live in troops of siblings, with the bigwings as the caretaker and leader. These sib groups love and trust one another a great deal and work well as units of soldiers. They also protect one another and feel the loss of a sibling deeply.[19] When a sibling is killed or lost, a sib group may take in another dragon who has been orphaned from their own group, known as "unsibs." Several unsibs may gather to form their own troop.[20]

MudWings have been stereotyped throughout history as dumb by most dragons.[21][22] However, according to Bullfrog, the events of the Scorching are in every MudWing history book.[23]

MudWing names generally relate to the earth, swamps, and the things that reside there such as Reed, Crane, Pheasant, Sora, Moorhen, and Cattail, or shades of brown, such as Umber, Sepia, and Ochre. Sometimes they can also be named after types of diamonds or minerals, such as Asha. Synonyms of swamps or swampy areas are also used as names, such as Marsh, Swamp, and Bog.