Start a Wiki
The Mud Kingdom is the home of the MudWings, who thrive in the swampy and humid climate. If we base it on how the continent is shaped like a dragon, it forms the back of Pyrrhia which is right under the Sky Kingdom's wing and next to the Rainforest Kingdom and the Kingdom of the Sea. Queen Moorhen currently rules the Mud Kingdom. There is also a delta and a ravine/fissure mentioned in The Dragonet Prophecy, where a battle took place between Blaze's army and the MudWings.

The Mud Kingdom is a territory in eastern Pyrrhia, north of the rainforest. It is described by Turtle as "Dreary, swampy, and bog-riddled", despite the fact that in real life, wetlands are full of life.  The kingdom is mostly various forms of wetland, with rivers, including the Diamond Spray River, which feeds into the Diamond Spray Delta in the north. The kingdom also contains areas of grassland and temperate forest, with some of the grassland hypothetically being used for agriculture.

Where the Mud Kingdom meets the Kingdom of the Sea, the forest and ocean are separated by a strip of sandy beach. Where it meets the Rainforest Kingdom, there is an area of swampy, foggy forest that gradually transitions into the rainforest.

Queen Moorhen's Palace is next to a large lake at the southern edge of the Mud Kingdom, around a day's flight from the rainforest. At least two scavenger dens are known to be within the Mud Kingdom's territory.

Queen Moorhen's Palace is the palace for the MudWing tribe. Not much else is known about it since no protagonist has ever been there in the Wings of Fire books.

The Diamond Spray Delta is known for being the home of the lowest-born MudWings. There is a path of dried dirt that runs through the Delta's village. On either side, there are large mud puddles for MudWings to sleep and hunt in, as well as sleephouses. Sleephouses are tall mud towers that each MudWing troop of sibs sleep in. Generally, one troop sleeps in a certain sleephouse.

Clay meets his mother, Cattail, along with his siblings Reed, Pheasant, Umber, and Sora with Glory near the Diamond Spray Delta, which, according to Kestrel, is where "the lowest-born MudWings crawl". The dragons of the Mud Kingdom live in huts with their sibling units made of mud with holes in them to enter and exit.

The dragonets and Webs walk along the outskirts of the Mud Kingdom to get to the rainforest. Starflight claims Queen Moorhen's palace is near a large lake and only a day's flight away. They also find two dead MudWing soldiers, killed by the NightWings.

Sunny and Clay went to the Mud Kingdom so they could visit the dreams of the MudWings with a dreamvisitor, to convince Burn into coming to the meeting. They learned that the MudWings were planning an assault on the IceWings, and managed to convince Queen Moorhen to drop the idea.

The Mud Kingdom on the map of Pyrrhia

The Mud Kingdom up close. Map by Mike Schley. Zooming done by Bloodfrost of the IceWings.

Flag of the Mud Kingdom 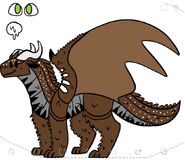