The NightWing island became the secret home of the NightWings shortly after the tribe abandoned the lost city of night in fear of Darkstalker's return. It is connected to the Rainforest Kingdom by an animus-enchanted tunnel, but can also be reached by crossing the sea. It is located north of Pyrrhia, although the exact location is unknown.

After the island's volcano erupted in The Dark Secret, the NightWings fled to the Rainforest Kingdom and accepted Glory as their new queen (an event that is known as the NightWing Exodus).

The island is smaller than Winter had imagined when he thought of the NightWing's secret home. It made him feel instantly claustrophobic, and there is a vast ocean lurking in all directions.[1] Dense ripples of black lava flows cover everything, still glowing orange and yellow where liquid fire is spilling through the cracks. The volcano cuts jaggedly into the sky, but it looks as though the top has been smashed in, leaving a smoking hole. Thick gray clouds, heavy with ash and smoke and sizzling with lightning, stretch across the sky, blocking the stars and moons. Everything smells like sulfur and fire and death.[2] There are sulfurous smoke vents dotting the ground.[3]

The island was covered in trees when the NightWings arrived on it, but the volcano erupted several times over the next two millennia, so the forests were almost all destroyed.[4] The island is currently a rocky, mountainous wasteland with lava rivers crisscrossing it surrounded by a stormy, gray, cold, and extremely salty sea. The one patch of forest on the island consists of several clusters of dead, leafless, smoke-clogged trees. Some areas were unsafe to walk on due to underground lava pockets and hot rock surfaces.[citation needed] Wet black sand covered the ground near the tunnels.[5]

The epilogue featured the island, where the false dragonets of destiny were kept.

The NightWing island was the main setting of the book, where Starflight was taken to. He awoke in the dragonet dormitory, where he met other NightWing dragonets. The volcano erupted at the end of the book and Starflight was blinded from the incident. The NightWings swore loyalty to Glory as they left the island for good.

The island was mentioned throughout the book.

Winter and his friends traveled through the NightWing tunnel to come to the island, searching for Icicle. When they found her, she was in horrible condition due to avoiding sleep. After Glory tranquilized her, they left the island.

Fierceteeth recounted multiple memories of her pasts while passing letters with Saguaro. The NightWing island was the main setting for most of these letters.

Deathbringer grew up in the NightWing island and left when he was assigned a mission to assassinate Commander Tempest.

The NightWing Island from the cover of The Dark Secret (without Starflight), by Joy Ang

The NightWing Island from The Hidden Kingdom (graphic novel), by Mike Holmes

The NightWing fortress, by Mike Holmes

The NightWing fortress, by Mike Holmes 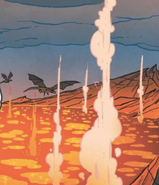 The NightWing library, by Mike Holmes

The entrance to the abandoned NightWing treasury, by Mike Holmes 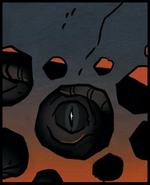