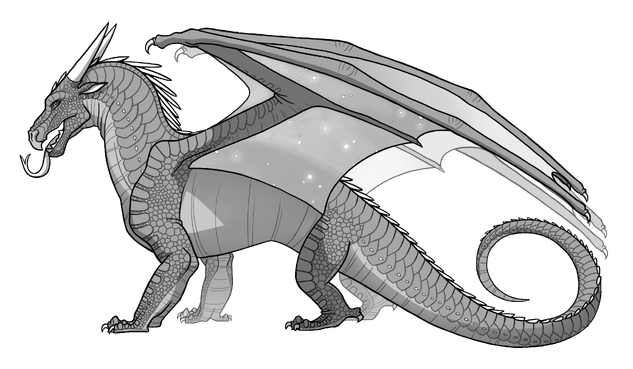 NightWings, also known as night dragons to humans, are a Pyrrhian dragon tribe who currently reside in the Rainforest Kingdom, a tropical rainforest in the lower southeast of Pyrrhia. They are currently ruled by Queen Glory.

The NightWing tribe previously lived on the Talon Peninsula, also known as the lost city of night, otherwise known as the old Night Kingdom. After Darkstalker murdered Prince Arctic, the NightWings moved to the NightWing island off the northern coast of the Sky Kingdom and remained there until the NightWing Exodus. They were secretly allied with Blister towards the end of the War of SandWing Succession.

A large portion of the tribe was briefly ruled by (King) Darkstalker in the second arc. There were only fifty or so NightWings who stayed in the rainforest during this time.

NightWings are based on monitor lizards.[event 1] They have been described to have forked, pitch-black tongues, as well as dark scales which are usually black or in shades of dark green, blue, or purple. They also have silver, white, gray, purple, dark green, or blue underbellies, and dapples of silver scales running along their necks. Their wings have silver scales scattered across them like the stars of a night sky, forming different patterns. These patterns are genetic.[1] NightWings have been described with black, dark blue, dark brown, purple, or dark green eyes. They have straight horns.[2]

NightWings can melt into shadows and blend into the night sky due to their colors and wing patterns. Mind readers have silver teardrop scales by the corners of their eyes,[3] and empaths such as Fatespeaker will also have these teardrop scales.[4]

On the volcanic island, NightWings ate mostly carrion. They would bite their prey, poisoning it with bacteria from inside their mouths, and leave it to decease. After it was dead, they would return to eat it.[5] On the island, seafaring birds could be found. They would also hunt in the rainforest, including sloths, and may have gathered some fruit. While living on this island, most NightWings ate once per week, which contributed to their malnutrition.[6]

After relocating to the rainforest, NightWings began to incorporate fruits and vegetables into their diet, though they continue to eat meat,[7] with the exception of sloths.

In the time of Darkstalker, hunting was very similar to other tribes. They ate hawks,[8] fish,[9] bears,[10] squirrels,[9] rattlesnakes,[9] and wolves.[11] They cooked their food, including roasted nuts and baked bear, and had access to cheese.[10] They would also purchase fruits from RainWing merchants.[10]

NightWings are a nocturnal[12] tribe that can blend into the night sky and shadows. They can also breathe fire, and most modern NightWings have mouths stuffed with dirty bacteria which can poison animals with a single bite.[13] However, it is noted that after searching through the corpses of dead NightWings, there was no venom found in their teeth.[14] They have a strong sense of smell[6] and powerful night vision.[15][16]

NightWings hatched under one full moon have the power of mind-reading or prophecy, and those hatched under two have both. Dragonets hatched under three full moons will have both of these powers, made stronger by the third moon. NightWings once thought that the third full moon gave animus powers, though this was later disconfirmed, as animus powers are passed on genetically.[17] The power of the gifts vary, such as Clearsight having strong foresight.[event 2] When the NightWings moved to the volcanic island, knowledge of these powers was forgotten, possibly on purpose.[18] NightWing eggs touched by moonlight will turn an eerie polished silver color, while untouched eggs remain an ebony black.[19]

Mind-reading NightWings can observe the thoughts of those around them. They cannot 'rummage around' in another dragon's head, but hear thoughts as the dragon thinks them, often only picking up on jumbled words, pictures, and emotions; thoughts are louder and stronger to the mind reader when they are touching the former.[20] In the time of Darkstalker, dragonets were taught ways to block out the minds of others, though this practice was lost over time without powers.[21] Mind readers can project their thoughts to one another to have mental conversations, and powerful mind readers may be able to block the visions of prophets.[22][23] Dragons with this power hatched under a blood moon can project their thoughts to any dragon, not just other mind readers.[event 3]

Prophetic NightWings can see flashes and visions of the future. On occasion, they will have a true prophecy, which will manifest as words rather than a vision in the dragon's head.[24] In the time of Darkstalker, prophets would sometimes take regular visions and translate them to sound like real prophecies. Very powerful prophets may be able to look into the future and follow individual timelines.[25] Futures have been described as 'webs', as they overlap and are easily mixed up.[26] Prophets hatched beneath a blood moon can see terrible events and natural disasters with particular clarity.[event 4] When NightWings deliver prophecies, their eyes glow and their voices become low and shivery.[27]

NightWings have animus dragons, with the earliest known powers tracing back to the NightWing-IceWing hybrid Darkstalker. All known animus dragons are descended from Whiteout, as she carried animus genetics while Darkstalker did not have dragonets.[28] They may have had animus magic before Darkstalker, as they once believed that the third full moon gave animus magic.[17] In modern times, they are likely expected or forced to use their powers for the good of their tribe.[29]

NightWing society is undergoing a great deal of change as they adjust to life in the Rainforest. Many of them were bitter due to their queen being a RainWing,[30] and although some have become more accepting of the idea,[31] Glory's queenship is quite controversial among them,[32] but they still contain a tribal aura of mystery[33] and spookiness.[34]

While living on the volcanic island, NightWings poured a great deal of effort into making their tribe seem mysterious and powerful to hide their real weakened state. They trained their dragonets to lie about their 'powers,' and kept them confined to the island until at least age ten to prevent any breaches of information.[35][36]

They were exceptionally skilled at keeping secrets,[37][38] and NightWing information was given to dragonets as they grow older.[39] They were not allowed to leave the island until the age of ten,[40] and most NightWings would try to counter sarcasm with more sarcasm, as though every conversation was a competition to see whose wit was more biting. No one ever stopped to acknowledge that someone else was funny.[41] In general, sentimental sincerity was not a NightWing trait.[42] Loyalty, secrecy, and obedience to NightWing elders were the most important lessons for dragonets within the tribe,[43] and young NightWings were kept away from other tribes, as older dragons did not trust them to keep NightWing secrets.[44] When Battlewinner disappeared from public view, enforcement of guard and patrol duties was considerably weakened,[45] and many citizens believed that guarding and patrolling an island that no one was able to locate was ultimately pointless.[46] Leaving the island and traveling to the mainland was every young dragonet's dream.[47] NightWings were not supposed to be seen within the mainland,[48] and Deathbringer's main objective as an assassin was to ensure that the NightWing involvement in the War of SandWing Succession was kept under heavy secrecy.[49]

A game involving bones and tiny skulls were played by a pair of two adult NightWings.[46]

In the time of Darkstalker, NightWing mothers typically named their dragonets.[50] The tribe also functioned nocturnally.[51] NightWings of higher status lived in higher homes in the cliffs, while lower ones lived closer to the bottom, where less desirable homes were.[52] They also appeared to value knowledge and reading, as they had an extensive library[53] and honored the first librarians of the kingdom.[54] In Clearsight's time, the NightWings were famous for their intertribal relations, open trade partnerships, literature, and artwork, which had been sold across the continent. Dragons from all over Pyrrhia brought them new ideas, inventions, and discoveries.[55]

NightWings had a centuries-old feud with the IceWings due to the legend of Foeslayer and Arctic, known as the NightWing-IceWing War. The feud is at least on pause as of Darkness of Dragons.[56]

Ancient NightWing nests were depicted as bowls of carved stone that are lined with black fur, and eggs are typically hatched atop high mountain peaks.[57]

NightWing names may be descriptive of the dragon's personality (such as Thoughtful, Greatness, Wisdom, and Listener), relate to an aptitude or job (such as Mastermind, Deathbringer, or Quickstrike), describe or relate to their physical appearance (such as Bigtail and Strongwings), or be night-themed (such as Starflight, Eclipse, and Moonwatcher.) Their names may also be inspired by the NightWing powers (names such as Fatespeaker, Mindreader, and Morrowseer.) Most NightWing names are meant to give a sense of strength or mightiness.