Wings of Fire Wiki
Register
Don't have an account?
Sign In
Advertisement
in: Characters, Males, MudWings,
and 11 more
English

Alive (as of The Brightest Night)

Ochre is an adult male MudWing who was introduced in The Hidden Kingdom. He was formerly part of the false dragonets of destiny organized by Morrowseer as the replacement for Clay. He is currently a member of the Talons of Peace.

Ochre has dark[1] mahogany-brown scales[2] and dull eyes.[3] When Fatespeaker introduced Starflight to the false dragonets, she called him "the fat one"[4], which corresponds with how he is shown to be eating both a lot and often.

Ochre is described as being clumsy, uncaring, greedy, pushy,[5] unlikeable,[5] disagreeable,[5] and pessimistic. Sunny describes him as the unfunny and unpleasant version of Clay[5] and even during their first encounter, she felt there was something about him that rubbed her the wrong way.[2] He is shown to have a voracious appetite and refuses to share with anyone else.[6] Flame referred to him as an idiot.[7]

"I don't think I should have eaten that dead thing, […] Or all of your dead things."
― to the false dragonets of destiny (The Hidden Kingdom, page 294)

"I will never never never go a whole month without eating."
― to Starflight (The Dark Secret, page 115) 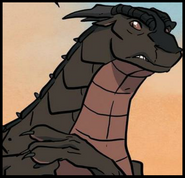