Wings of Fire Wiki
Register
Don't have an account?
Sign In
in: Characters, Males, SkyWings,
and 8 more
English

"Consider first the charge of disobedience. Kestrel did not do as you ordered — but then, didn't you reverse the order after she was gone?"
— Osprey to Scarlet about Kestrel, The Dragonet Prophecy

Injuries inflicted by Queen Scarlet making him fall to his death

Osprey was a flightless elderly male SkyWing who was introduced in The Dragonet Prophecy. He worked as the defense attorney for SkyWing trials and died of severe wounds after being dropped from the sky by Scarlet.

Osprey had washed-out red scales, a paralyzed tail, and was almost blind.[1] His voice was creaky with age, but still loud enough to carry to the SkyWing arena's prisoners.[2]

Osprey was a kind dragon, mellow compared to other SkyWings. He chose to befriend Peril, teaching her how to read and write as well as the history of the SkyWings. He was also shown to be a fair and righteous dragon, not hesitating to defend Kestrel and point out Scarlet's unfair decisions despite knowing the dreadful consequences.

Along with his kindness, Osprey appears to be intelligent and a good teacher, as he taught Peril literacy and SkyWing politics.

Osprey was mentioned to be Peril's only friend before meeting Clay. Osprey taught her how to read and write, even if she couldn't touch a scroll without burning it, as well as the history of the SkyWings. Their friendship was strong, shown when Peril tried to save him from falling to his death despite knowing she has deadly firescales.

Tui stated she thinks Osprey knew he would die after defending Kestrel; he made the sacrifice for Peril's sake — so that she'd know the truth.[event 1]

Osprey follows Scarlet as his queen, but was clearly afraid of her. She only let him live because he gave her all his treasure, and ultimately ended up killing him for teaching Peril too much.

"Your Majesty, […] I do have one or two words to say in this prisoner's defense."
― to Queen Scarlet, during Kestrel's trial (The Dragonet Prophecy, page 178)

"Consider first the charge of disobedience. Kestrel did not do as you ordered— but then, didn't you reverse the order after she was gone?"
― during Kestrel's trial (The Dragonet Prophecy, page 178)

"Forgive me, Your Majesty, […] I must speak. Kestrel was one of your most loyal soldiers. She was sent through the breeding program, on your orders, and brought forth one egg. Upon hatching, it turned out to hold twin dragonets."
― during Kestrel's trial (The Dragonet Prophecy, page 178)

"You told your guards — I know, for I was one of them — to kill the other dragonet and take Kestrel back for trial. She tried to grab her daughter and fly away, but the heat of the dragonet's scales burned her talons before she was a wingbeat into the sky, and she had to drop her. She fled, leaving her only living dragonet at your mercy."
― during Kestrel's trial (The Dragonet Prophecy, page 180)

"When you caught her, the dragonets had hatched. I know. Because I was one of the guards who was with you. You told her you'd forgive her and let her live — if she killed one of her dragonets. So she killed that dragonet with too little fire, right there at the river, with her own claws. But even though she did what you said, you told us to kill her other dragonet anyway! She grabbed her daughter. She tried to fly away — But she was too badly burned and was forced to drop her. So she fled, leaving her only dragonet at your mercy."
― during Kestrel's trial (The Dragonet Prophecy (graphic novel), page 116) 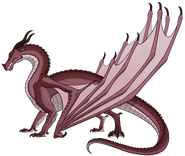 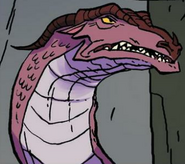