Pantala, also known as the Lost Continent by the dragons of Pyrrhia, is one of the two known continents in the Wings of Fire series, the other being Pyrrhia. It takes multiple days of flight (or swimming in the case of Turtle and Tsunami) from the west of Pyrrhia to get there. Its existence was hinted at occasionally, before being confirmed at the end of Darkness of Dragons. Several dragons have traveled between the continents: Luna was blown to Pyrrhia by a storm, Tsunami and Turtle swam to Pantala, and Clearsight flew to Pantala to warn the Pantalans of a dangerous hurricane, as well as the whole of the BeetleWing and LeafWing tribes in the Legend of the Hive. Eleven representatives are also currently traveling from Pyrrhia to Pantala, specifically Bullfrog, Qibli, Sky, Wren, Tsunami, Pineapple, Lynx, Moonwatcher, Cricket, Sundew, and Luna. The Pantalan dragon types are based on insects (the BeetleWings and their descendants, SilkWings and HiveWings) and plants (the LeafWings). In the epilogue, Hope showed Moonwatcher Pantala's possible position on the planet via an example, which showed it on the opposite side of the dragon planet from Pyrrhia.

Pantala is a dragon-shaped continent consisting of a grassland and savanna biome primarily. All over the continent are watering holes and rivers which are often dry.[event 1] Pantala also has a rainy season[1] and dry season, with moderate to hot temperatures.[event 2] It is covered with tall grass.[2]

The most prominent landmarks of Pantala are the Hives, which are connected structures that host most of the continent's SilkWings and HiveWings. It has several landmarks aside from the Hives, including Lake Scorpion, Beetle Lake, Dragonfly Bay, and the Poison Jungle. The jungle is in the top right of the continent, on the 'head' of the continent. Within the Poison Jungle are the Snarling River and the Gullet River, which are where the neck and mouth would be if Pantala was a dragon. The whole continent of Pantala was covered in forest and all three tribes of Pantala co-existed in the whole forest peacefully until Queen Wasp took over.[event 3]

The abyss is a pit somewhere in Pantala, which has something glowing and green within it. It has been acting strangely "for the first time in years" ever since the othermind escaped the Poison Jungle. Whispers were mentioned to be coming from it, reaching the upper caves of Raven's village.

The nine Hives are cities[3][4] inhabited by HiveWings and SilkWings, with Wasp Hive being the oldest.[5] The Hives are made of treestuff, which is made from wood from Pantala's forests and spread out in a wide circle across the continent, with silk bridges connecting them.[3] Each Hive is ruled by one of Wasp's relatives.

The Poison Jungle was the last remaining forest on Pantala after the Tree Wars. It was said to be full of dangerous plants and wildlife, which was why the forest was left alone by the Queen Wasp and the HiveWings. Various dangerous plants that were described to be in the jungle are sundews, venus dragon-traps, cobra lilies, waterwheels, and the quarantined othermind.[6] Further in the jungle are the homes of both LeafWing factions, the PoisonWings and the SapWings. The jungle was destroyed by the end of The Poison Jungle when the breath of evil manipulated Blue into burning the forest with flamesilk.

Lake Scorpion is a large lake located on the "tail" of Pantala, in the southern region. It is one of Pantala's largest lakes. The SilkWings from Jewel Hive, along with Lady Jewel and Scarab intended to flee to the lake.[7]

Dragonfly Bay is a bay located on the east coast of Pantala.

Beetle Lake is a large lake located on the "wing" of Pantala, in the western region. It is one of Pantala's largest lakes.

Map of Pantala, by Mike Schley 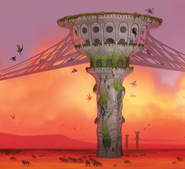 Pantala on the cover of The Lost Continent, by Joy Ang
Add a photo to this gallery

Retrieved from "https://wingsoffire.fandom.com/wiki/Pantala?oldid=7408107"
Community content is available under CC-BY-SA unless otherwise noted.