"You know I could easily kill you from a distance. It would barely take a thought. But you've been such a thorn in my side the last few years. Every chance she got—I don't really need you anymore. Perhaps Fathom will be better at this than you are. You're so expendable now that I have a replacement. What a pathetic creature you are, little brother, with your tiny teeth and oddly colored scales. Fathom is so much more presentable than you are... So, no, I couldn't dispose of you from afar. That wouldn't be satisfying at all. I want to see your face as you die."
—Albatross hunting Fathom, talking about how Queen Lagoon treated him, Darkstalker

Elderly, old enough to be a grandfather

Prince Albatross was an elderly male SeaWing animus who lived in the time of Darkstalker. He was the first noted SeaWing animus dragon and a member of the SeaWing Royal Family, being Queen Lagoon's brother. He committed The Royal SeaWing Massacre, murdering most of the royal family before being killed by Prince Fathom and Indigo.

Presently, Albatross is still mentioned in many history texts, as his massacre is one of the most devastating cases of animus magic in Pyrrhian history.

Albatross is described to be "nearly a neck-length taller" than his sister Queen Lagoon[1], with long, majestic wings[2]. His scales are a blue-grey but so pale that in places they looked almost white,[2] while his eyes are described to be hooded[3] and so deep, dark blue that they appeared black[2]. In fact, he is compared to a seagull during the Talons of Power Ceremony, both in their coloring and shrewd expressions[2]. His odd coloration carries on through the SeaWing royal family, as seen in Princess Anemone's pale colors. Albatross also was described as having small teeth[4][5] and a long, hooked snout[2]. This is believed to be caused by a IceWing hybridization.

Before Prince Albatross became murderous and turned insane due to his Animus powers, he was a pleasant dragon, jovial and polite. He was not truly happy, as Queen Lagoon had forced him to use his power to serve her (to atone for maiming Princess Sapphire while they were dragonets). He later expresses little to no remorse about this spell, however; at the soon-to-be Summer Palace, he laughed and stated: “Who swims like a feeble old duck, now?" When Fathom's animus power was discovered, Albatross acted as a mentor, and was friendly and funny, making jokes, laughing, and bonding with his grandson until the night of the massacre. He refused to allow the younger animus to cast spells, suggesting some level of care or concern for Fathom's soul. He showed no hesitance or remorse when he massacred his family, indicating that he may have lost his soul to animus magic.

Fathom described Albatross as "a kind but distant figure" throughout his life, but Albatross seemed excited when he found out that Fathom was an animus. Like his mentor, Fathom said Albatross cared for his grandson and had been a good dragon before. However, when Albatross became insane, he claimed he was resentful towards Fathom for decreasing Albatross's importance as the SeaWing animus. During the Royal SeaWing Massacre, Albatross told Fathom he could have easily killed him from a distance but wanted to see him die.

Albatross's older sisters, Lagoon and Sapphire, bullied him when they were dragonets. Once, Albatross accidentally enchanted a clam, biting off Sapphire's claws when she tried to steal the clam he was happily playing with. Sapphire became hysterical and insane. Throughout his life, Queen Lagoon continued to take advantage of Albatross, but during the Royal SeaWing Massacre, he snapped and killed her.

"Some of you may have heard of animus magic. It is a rare kind of immense power, and a dragon is either born with it or he isn't. What we are doing today is a simple test to see if you have that power. Almost certainly you do not. [...] Pick up your coconut, [...] Now, [...] tell your coconut to fly over here and hit me."
— to the dragonets, during the animus trial (Darkstalker, page 5)

"You use your power, if you have any, [...] An animus dragon can enchant any object to do what he wants it to do. I can do it now without even speaking, but saying it out loud is the way to start. Simply whisper to your coconut that you want it to fly over here and hit me."
— to Indigo, during the animus trial (Darkstalker, page 6)

"It's a new palace, grandson, [...] Entirely grown by animus power. I call it the Summer Palace-- a place where royalty can escape to enjoy the warmest weather of the year. [...] Here's what it will look like when it's finished."
— to Fathom, about the Summer Palace (Darkstalker, page 26)

"That's the plan, [...] I check on it regularly, making adjustments and adding features. It's been growing for more than seven years, so it shouldn't be much longer."
— about the Summer Palace (Darkstalker, page 27)

"I enchanted it to grow carefully and precisely, like a tree, [...] Anything faster and wilder could have damaged the ecosystem of the whole island."
— about the Summer Palace (Darkstalker, page 27)

"The first lesson about being an animus, [...] is that you must always be careful. Remember this is powerful, powerful magic. It can go wrong very easily. It's so powerful that you can do almost anything, except bring a dragon back from the dead."
— to Fathom, about animus magic (Darkstalker, page 28)

"Grandson. [...] Hiding like a nervous hermit crab. Interesting choice. One I should have expected, though, from such a little dragonet with such a limited imagination."
— to Fathom, during the Massacre (Darkstalker, page 93)

"You know I could easily kill you from a distance. It would barely take a thought. But you've been such a thorn in my side for the last few years. Every chance she got-- 'I don't really need you anymore. Perhaps Fathom will be better at this than you are. You're so expendable now that I have a replacement. What a pathetic creature you are, little brother, with your tiny teeth and oddly colored scales. Fathom is so much more presentable than you are.' [...] So, no, I couldn't dispose of you from afar. That wouldn't be satisfying at all. I want to see your face as you die."
— to Fathom (Darkstalker, page 93) 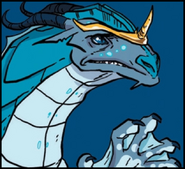 Albatross from The Lost Heir (Graphic Novel), by Mike Holmes 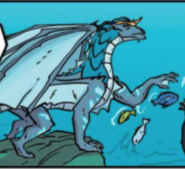