"How would I know if I was a bad guy?"
—Prince Cowrie to Fathom and Indigo in Darkstalker.

Less than a year at last appearance (roughly 3017 AS)

Island off of Pyrrhia's Southeastern coast

Cowrie was a young male SeaWing dragonet, and part of the SeaWing Royal Family as one of Fathom and Indigo's children. He was the brother of Ripple and Clearpool.

Cowrie appeared to be the most thoughtful of Indigo and Fathom's offspring, and was the only one who was actually concerned about what his parents are saying, fretting about if he would ever commit the sort of "bad guy" crimes and how he would know. Despite these concerns, he seemed to have had a crazy side, similarly to his siblings. He also appeared to have forged a particular relationship with Blob.

Cowrie makes his only appearance is in the epilogue of Darkstalker (Legends) when he accidentally gets sand kicked into the hole he is digging by Clearpool. This causes a fight between them. Ripple joins in the fight, squashing him and Clearpool. In order to end the fight, Indigo decides to tell them a story. Cowrie requests to hear a story about bad guys, which shocks both Indigo and Fathom. The two parents tell a little bit about villains and Darkstalker, and Cowrie worries if he will ever become a villain. However, Indigo is able to calm him down.

"Roar! Get your big galumphing talons out of here!" - Cowrie to Clearpool Darkstalker (Legends), page 360

"Mommy, do you know any stories about bad guys?" - Cowrie to Indigo Darkstalker (Legends), page 363 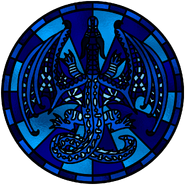 Retrieved from "https://wingsoffire.fandom.com/wiki/Prince_Cowrie?oldid=4419465"
Community content is available under CC-BY-SA unless otherwise noted.