The Rainforest Kingdom is a vast jungle that covers most of the southeastern part of Pyrrhia. It is occupied by the RainWings and most of the NightWings, and is currently ruled by Queen Glory.

The Rainforest Kingdom is a wild assault of greenery[1] consisting of colorful birds, tall, whispering trees, exuberant flowers,[2] tangles of vines, and a thick canopy of green leaves overhead. The sounds of howling, buzzing, and a waterfall can be heard in some areas.[3] There are many strange smells, as well as heat that is damp and sticky. There are giant spiderwebs everywhere,[4] with at least one river with oozing black mud, reeds, and a huge boulder along its banks.[5] A damp layer of leaves[6] and bracken[7] covered the forest floor, where it is cool and muddy.[8] Quicksand exists in some places of the rainforest,[9] and the canopies were sunlit emerald-green and whirring with the whispers of tiny wings.[10]

At daytime, warm bursts of sunlight nudged through the leafy canopies.[11] At nighttime, the rainforest is filled with a cacophony of noises from birds, frogs, insects,[12] burps, gurgles, and rustling.[13] The air smells like mangoes, moss, and river rocks.[14]

The Rainforest Kingdom includes a particularly large banyan tree, located a short flight away from the royal pavilion. It is an enormous, fat tree with bulging branches and knobby roots sticking out from the undergrowth.[15] Its roots, some as fat around as a dragon, extend far, all the way to a wall of bushes where the forest floor begins sloping up.[7]

The village consisted of treehouses, fruits, platforms, hammocks, and trees. The roofs of the houses are made of leaves, making it harder to see the houses from the top. Wide vine walkways, shimmering with talon-sized orange orchids, hung between leafy platforms.[16] A few of the treehouses had low walls or woven ceilings; others were open to the sky and carpeted with soft white flowers. Gray sloths ambled and swung between the walkways,[17] and hammocks were strung between trees, sturdily woven of vines and lined with violet feathers and blue petals.[17] There is a trampoline of vines in between two platforms, where dragonets bounced and flapped their wings as they learned to fly.[18] RainWings are usually found standing on the trees.[19]

The village has three hatcheries, with each hatchery holding a third of the village's eggs.[20] The eggs are mixed together and dragonets are raised by the whole village, making it hard to find out whether one is related to another, unless they do a venom test.[21] One hatchery was shaped like a gigantic green egg, with holes all over the roof that allowed sunlight through the overlapping leaves. The bottom was reinforced with tightly woven vines and sturdy branches, and the eggs closest to hatching are kept on the outer edge.[20] Jambu explained that the eggs keep each other warm and hatch whenever they need to — every once a while, the RainWings stop by to check for newly hatched dragonets.[20] Under the rule of Queen Glory, RainWings have begun to sort eggs and may begin to form family units.[citation needed]

There is a large treehouse that houses the queen. It is not so different from all the other treehouses, although it is a bit higher and closer to the sun, with an open roof and five giant open windows in the curved outside walls. A short hanging walkway, where dragons line up for meetings with the queen, glowed with fuchsia flowers shaped like dragon tongues. The walkway led from a doorway to another dragon platform[22] and to the queen's room, where a curtain of silvery yellow flowers that smelled of honey and vanilla[23] hung in the doorway.[24] Lacy scarlet flowers and scraps of russet monkey fur made up the queen's nest.[23] There is a Royal Garden of which Tamarin, one of the gardeners, takes care of.[25] The queen sleeps in a royal treehouse that is surrounded by eerie, glow-in-the-dark moths and pale night orchids.[26]

Around twelve tree lodges down from the queen's treehouse sits the healer's pavilion. Red berries grew in its balcony.[27] The hut is close to the sunning platform with skylights shining through its leafy roofs. Their houses are made in the trees with leaves as windows and the trees as a natural wall.[citation needed]

At the center of the village is a structure called the Arboretum, which resembles a peaceful version of the SkyWing arena.[28] The Arboretum has a huge platform made from woven branches, which is surrounded by more treehouses, some of which have been set up as fruit stands.[28] Historically, the Arboretum was used as a meeting place for the RainWings,[citation needed] while in modern day, it is where many public events take place, such as the RainWing Royal Challenge.[28]

The NightWing Village is occupied by most of the NightWing tribe living in the rainforest. Wingbeats, branches being ripped off trees, and hammering can be heard near the village, as well as the smell of meat cooking over a fire. At the entrance of the village, two NightWings stand guard on either side of a pathway that has been cleared through the trees.[29]

When Winter visited the village, there were NightWings grappling with vines, bushes, and trees to try and expand the open space. Others were washing fruit in a nearby river, which is close to a set of cooking fires built close to the ground. Ramshackle huts dot the clearing with roofs of giant palm leaves. It is noted that half of the houses in the village had sprung from Mightyclaws's magic, given to him by Darkstalker. It is cool and muddy on the rainforest floor.[8]

The Royal Pavilion is built halfway between the NightWing and RainWing villages, and is used for anything official. It is a vast platform built up in the air, upon a circle of branches from tall, overlapping trees. It sits about halfway between the forest floor and the treetops, and it has a roof made of translucent green leaves that sits atop wooden columns, so that the pavilion is open to the air[30] but sheltered from the rain. Purple and blue morning glories hang like bells from the vines that wind around each column.[31]

The pavilion has a clawmarked wooden floor and an interior that is nearly empty. Two scroll racks stand on either side of a simple raised dais that sits only a few inches higher than the rest of the platform.[31]

The Healer's Pavilion is large, and located near the RainWing village. It is quiet and sunlit, with curtains of green vines shielding the interior from onlookers.[32] The curtains shield each patient from view, and there are rafters as well as piles of medicinal leaves occupying the pavilion.[33]

At night, the pavilion is dimly lit by a few beams of moonlight and several jars hanging from the ceiling that appear to contain fireflies. Bullfrog, one of the RainWing healers, has a hammock set up next to one patient's bed.[34]

There is one curtained-off corner of the pavilion with the only window open to the sky.[35]

The Dragonet Wingery is a well-fortified area that is not far from the Royal Pavilion.[36] The wingery's main play area consists of enormous trampoline made of springy vines and leaves and strung between several trees high above the ground. It is surrounded on all sides by tall, soft woven mats of branches that keep the baby dragons from falling over the edge of the wingery. Six full-grown dragons guard the perimeter: three NightWings and three RainWings, all of whom look more tense and alert than the rest of their tribes.[37] It has platforms surrounding the trampoline inside, and the space is full of peculiar toys. The wingery consists of at least nine dragonets all younger than one year old, with seven RainWings[38] and two NightWings.[39] The floor is dark green,[40] and there is one corner is filled by a pile of curiously shaped branches and large seed pods.[41]

The Rainforest Kingdom was the main setting of the book, where the dragonets of destiny sought safety after escaping the prison in the Summer Palace.

After Starflight, Fatespeaker, and Flame's attempt to escape the NightWing island, Starflight and the others were brought safely inside the Rainforest Kingdom. The NightWings was soon evacuated into when the volcano finally exploded, an event which led to the NightWing Exodus near the end of the book.

The Rainforest Kingdom served as the main place where the dragonets of destiny met to discuss important subjects on how to end the war and home to the NightWings. It was also the place where Sunny was kidnapped by Fierceteeth, Strongwings, and Preyhunter.

In the prologue, Secretkeeper visited the Rainforest Kingdom and witnessed Moonwatcher hatching. The kingdom was mentioned throughout the book.

The Rainforest Kingdom is the main setting of the book, where Winter, Qibli, Moon, and Kinkajou searched for answers on Hailstorm and Scarlet's whereabouts. They planned to protect Queen Glory from a possible assassin, Icicle.

Turtle followed Darkstalker to the kingdom and also visited Kinkajou, who was recovering at the time. After awhile, Darkstalker took most of the NightWings to the lost city of night.

Fierceteeth shared how, after sneaking through the Rainforest tunnel with Strongwings, she was ecstatic about the idea of escaping the island by moving to the rainforest. When they returned to the NightWing island the two were barred from returning to the rainforest by Morrowseer; they would be allowed to go back once it was taken over by the NightWings. She then explained to Saguaro how the NightWings could have ensured Burn as the queen of the SandWings if the SandWings had helped her replace Glory as the queen of the Rainforest Kingdom.

The Rainforest Kingdom on the cover of The Hidden Kingdom, by Joy Ang

The Rainforest Kingdom from The Hidden Kingdom (graphic novel), by Mike Holmes

The Rainforest Kingdom on the full cover of The Hidden Kingdom, by Joy Ang

The Rainforest Kingdom from Scholastic HomeBase

The RainWing Village, by Mike Holmes

The Arboretum, by Mike Holmes 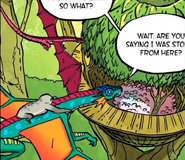 The RainWing hatchery, by Mike Holmes

The royal pavilion from The Dark Secret (graphic novel), by Mike Holmes

Rainforest Kingdom close up on the map of Pyrrhia, by Mike Schley

Rainforest Kingdom close up on the colored map of Pyrrhia, by Mike Schley