"Before the war takes anyone else I care about. Before our village is destroyed; before I have to choose between loyalty to my tribe and the safety of my brothers and sisters. Before we have to kill anyone else."
—Reed's thoughts, The Dark Secret

Reed is a young male MudWing who was introduced in The Dragonet Prophecy. During the War of SandWing Succession, he served as the bigwings of his troop and a soldier under Burn. He currently resides in the Mud Kingdom.

Reed has warm, golden-amber eyes and a claw-mark wound on his tail. He looks like Clay[1] and is a bit smaller than him, but larger than their other siblings[2].

Reed appears to have low self-esteem due to participating in war. After his first battle, he claimed he "wasn't the bigwings he wanted to be" and tried hard to protect his brothers and sisters, though they protested and told him that they would all be dead if it wasn't for him. When he learned that Clay was alive and well, he grew uncertain of himself, believing that Clay would have done a much better job. He often wondered what Clay would do in some situations, and whether Clay would have handled them better and saved Crane. He has also often wondered if Clay should have been the bigwings instead of him, and seems sad about that.

Reed hatched along with Sora, Pheasant, Umber, Crane, and Marsh. Clay had been sold to the Talons of Peace earlier in exchange for two cows. This left Reed to take over as the bigwings of the group, because he hatched second after Clay. Over time, the remaining siblings grew to respect him, thinking him to be the true bigwings, although Reed still doubted himself sometimes.

When Clay returned, Reed and the other siblings began to tell him about the MudWing traditions, and helped him make peace with himself. The others, including Reed, wanted Clay to stay and become their bigwings, but Clay said that he needed to fulfill the prophecy, and Glory saying he was his friends' bigwings. They all wanted Clay to stay and Reed offered Clay his job of becoming their bigwings, but Clay declined the offer, as he knew that Reed would be a better bigwings than he would as Reed's siblings trusted and knew him more. Therefore, he left with Glory after their short meeting. Reed was described as looking shocked and relieved at the same time. Reluctantly, Reed and his siblings let Clay go.

Mentioned by Glory, when she thinks about where the dragonets would go after the prophecy

After meeting Clay, Reed is left wondering whether or not the older dragonet could have done a better job protecting their siblings. He starts to believe that Clay could have saved Crane and that the others would prefer him instead. His low self-esteem makes him worried and sometimes distracted.

He and his siblings also participated in a losing battle against the IceWings, in which they retreated. They then debated on joining the Talons of Peace but decided against it, though they worried they may eventually have to choose between loyalty and safety.

Reed and his siblings are seen when Sunny and Clay go to the MudWings to send a message to Burn. Reed is wary to go along with the MudWing's planned attack on the IceWings, and he worries that he will lose his family and siblings.

In the epilogue, Clay suggested that Reed and his siblings should attend Jade Mountain Academy. Reed does not go, but three of his siblings, Sora, Umber, and Marsh, do go.

Umber mentions to the rest of the Jade Winglet that his siblings, Pheasant and Reed, were doing some work for Moorhen. Reed was also briefly thought of by Sora when Moon read her mind, and later when Sunny talks about dragons that will escort the Jade Mountain students back to their kingdoms, she thinks of a MudWing that matches the description of Reed.

"Before the war takes anyone else I care about. Before our village is destroyed; before I have to choose between loyalty to my tribe and the safety of my brothers and sisters. Before we have to kill anyone else." - Reed thinking of Clay fulfilling the prophecy along with the other dragonets of destiny

"And as long as the SeaWings are still in hiding, she can focus all her energy on the Ice Kingdom. On destroying them." - About Queen Moorhen's plan to attack the IceWings

"You're our brother. You should have been with us all along."

"And then we all stick together. For always. We learn how to hunt and survive together, we grow up together, and we live together for the rest of our lives. Every MudWing troop is a hatching of siblings. Except for the ones who've lost too many, and then they try to find unsibs to form a new troop with."-about the MudWing sibling groups 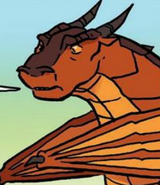