Wings of Fire Wiki
Register
Don't have an account?
Sign In
Advertisement
in: Characters, Females, SkyWings,
and 16 more
English

"I know it was bad, but you can make up for what you've done. At least you can try. If we let you try."
— Ruby to Peril about her past, Escaping Peril

The Hidden Kingdom,
The Dark Secret

Ruby, originally Tourmaline, is an adult female SkyWing who was introduced in Escaping Peril. Ruby's personality, memories, and appearance were created and contained in an animus-touched earring, enchanted by Chameleon. After removing the earring, Tourmaline's original memories, appearance, and strength returned, but she requested that Chameleon create a second enchantment to restore her physical appearance as Ruby. She is the current queen of the SkyWings and resides in the SkyWing palace with Cliff.

Ruby has very deep, dark red scales and wings,[1] a diamond-shaped head,[2] and an unusually long neck and tail, often remarked on by other dragons. She has small rubies glittering from between the scales around her eyes, and wears silver rings with larger rubies on them around her claws. She also owned an animus-enchanted earring, given to her by Chameleon, that turns her into Ruby.

Tourmaline was described to have dark orange scales and wings,[3] as well as horns that curved inward.[4] Her snout was also described to be slightly longer than Ruby's.[4] When Peril burned the animus-enchanted earring that turned her into Ruby, she became larger, burlier, and orange, rather than staying as Ruby, which was unexpected by Peril.

Ruby retained the wish to become queen,[5] but because of the threat of Peril and the sheer strength of Scarlet, couldn't. Ruby was more obedient, loyal, and agreeable so she could stay alive.[3] After she became queen, Ruby chose to solidify her throne and restore order instead of engaging in battles.[6]

She eventually became strong enough to overcome the enchantment and challenge Scarlet.[7] Ruby chose to take her throne the right way and to stop being a coward.[8]

Tourmaline was ambitious,[9] acted like a queen, and wasn't the type to run away. She didn't want to wait for things happen; she wanted to make them happen instead, and wanted them to happen her way. Tourmaline desired to be a decent queen to the SkyWings and to get out of the war.[3]

Ruby cares a lot about her son, Cliff, and is extremely protective of him, giving up her throne and kingdom so that he did not have to die. Cliff supposedly gave Ruby a "spark" that encouraged her to become queen and stand up to Scarlet, his grandmother.

Ruby used to hold extreme hatred over Peril because she thought that she killed her supposed sister, Tourmaline. Her first act as queen was to forbid Peril from ever entering the Sky Kingdom again. Their relationship remained strained until Peril offered herself to protect Cliff and use her firescales for the good of the kingdom, and in this case, killing Scarlet. After the events of Escaping Peril, she became much kinder and understanding toward Peril. Ruby even asked the firescales to come live in the Sky Palace if she wanted to, after realizing she never truly wanted to harm others and only did so under her mother's harsh command.

Scarlet and Ruby used to have a shaky relationship, with Scarlet referring to Ruby as her 'little mouse daughter.' Ruby tried to avoid her wrath and obeyed her, especially after knowing that Scarlet constantly had Peril by her side. This changed significantly when Glory deformed Scarlet, resulting in Ruby ascending to the throne. As of Escaping Peril, Ruby was no longer afraid of her, despite the enchantment written so that she would never be able to challenge Scarlet in a duel; Scarlet was killed by Ruby in the form of Tourmaline by the end of Escaping Peril.

"Are you planning to throw a scavenger at Mother? Because I'm sure she'd appreciate a snack before she kills you."
― to Tourmaline (Escaping Peril, prologue)

"This is definitely not me agreeing with her, […] but I think we absolutely should. Animus dragons are so dangerous — and more so the more they use their powers. According to our history, the SkyWing tribe used to kill them the moment we figured out what they were."
― about killing Animus dragons (Escaping Peril, page 36)

"Queen Scarlet of the SkyWings, I hereby challenge you to a duel for throne and kingdom."
― to Queen Scarlet (Escaping Peril, page 223-224)

"I have a lot of dragons who haven't recovered from the War of SandWing Succession. Or, to be honest, my mother's reign as the Super-Murdery Queen of the Mountains. I don't know if I can throw them into another conflict."
― Ruby to the Pyrrhian queens during a peace assembly about Scarlet (The Dangerous Gift, page 206) 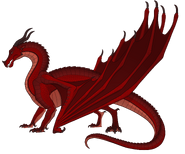 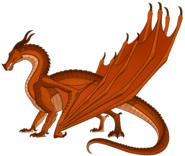