Wings of Fire Wiki
Register
Don't have an account?
Sign In
Advertisement
in: Characters, Females, HiveWings,
and 6 more
English

"They're already infected. As soon as they hatch, Wasp will be able to see through their eyes, and then she'll find us. You can't bring them along, or you doom everyone else."
— Scarab to Jewel about unhatched HiveWing dragonets, The Dangerous Gift

Scarab is an elderly female HiveWing royal who was introduced in The Lost Continent. She formerly served as the Minister of Education and is currently considered a fugitive in Pantala.

Scarab has lemon-yellow scales, black stripes on her wings, and ruby scales freckling her nose and tail.[1] She has black eyes with flickers of dark red in their depths[2] and wears a pair of spectacles.[1] She is grouchy and majestic.[3]

Although she often makes snappy remarks on Cricket's numerous questions,[4] Scarab demonstrates great respect for all dragons; Blue thinks she is fiercely not awful.[5] She seems to take an interest in painting.[6] She is intent[7] and blunt, and is not accustomed to gentleness.[8]

Scarab first comes up in a conversation between Blue and Cricket. She turns out to be deeply woven into Cricket's history. In The Hive Queen, it is revealed that Scarab helped cover for Cricket's egg. Scarab often scolds Cricket, but it is unlikely that she actually hates her. In The Hive Queen, she tells Cricket useful information, discussing the HiveWing bloodline and reasons why they both were immune to Wasp's mind control.

Scarab said that Cochineal was a much better liar than she was, which was likely why she was chosen by their mother. According to Scarab, Cochineal's daughters and Jewel could not be mind-controlled by Wasp as they were hatched around the same time as Wasp.

While Scarab is Jewel's mother, Jewel tends to find her annoying and unpredictable. Scarab often makes remarks about Jewel's attitude and how she runs her Hive and the care of her dragonets. In a mere conversation between them and Cricket, Scarab's biting comments about her daughter and Cricket irritated Jewel to the point of losing her composure several times. However, Scarab seems to truly care about Jewel and gives her advice no matter what.

Scarab describes him as brilliant, able to make excellent coffee, and full of exciting ideas.[9]

Wasp and Lady Scarab have an intense mutual dislike for each other. Wasp threatened to kill Scarab in The Hive Queen. Wasp is also shown to have done terrible things to Malachite and Katydid just to spite her.

"Choose an establishment friendlier to SilkWings next time."
― to Luna and Blue about The Sugar Dream (The Lost Continent, page 26)

"A young friend of mine. She's asleep, like a sensible dragon, so take your goons and shut up and go away."
― to Wasp when asked about Katydid, who she is hiding in her mansion (The Hive Queen, page 171)

"Not enough. I've wanted to get my claws on it for years. I assume you read it. What happens next? Say the words 'Wasp dies slowly and horribly' and I'll make you my heir."
― to Cricket (The Hive Queen, page 180)

"Maybe they weren't called SilkWings back then. ShimmerWings or Flibbertigibbets or something in the old language. I don't know. But Clearsight married one, and then another one when the first one died, and had an alarming number of dragonets with each one, and then their dragonets and their dragonets' dragonets kept going, marrying Ye Olde SilkWings or what have you, until there was enough of them to be considered their own tribe. HiveWings. Stupid menacing name, if you ask me. It was only about five hundred years ago that we officially split into two separate tribes, you know. My charming great-great-grandmother was the queen who ordered no more mingling of the bloodlines. She was a nightmare."
― to Cricket about Clearsight and the BeetleWings (The Hive Queen, page 182-183)

"Not according to the records. But then, if I were Clearsight, I'd tell my kids to keep that information to themselves. If you know the future, but no one else knows you know the future, you've got an advantage, see? HA! Maybe I am related to my family after all."
― to Cricket (The Hive Queen, page 184)

"She parades him past me whenever she can, always with those hateful white eyes. I don't know if he ever gets to be himself. I haven't seen him with his own eyes since the day she took him over and summoned him to Wasp Hive."
― to Cricket about Malachite being controlled (The Hive Queen, page 193)

"Not on your life. Those brats are very loud and I will not be tricked into dragonet-sitting. Stop distracting me and get on with interrogating this nitwit."
― to Jewel about dragonets (The Hive Queen, page 221)

"Well, this is a fine mess. NOW who's going to take down my dreadful niece? Certainly would be nice if I had a daughter willing to fight for the throne that should actually be ours."
― to Jewel and Tau about Wasp (The Dangerous Gift, page 121)

"They're already infected. As soon as they hatch, Wasp will be able to see through their eyes, and then she'll find us. You can't bring them along, or you doom everyone else."
― to Jewel about unhatched HiveWing dragonets (The Dangerous Gift, page 122) 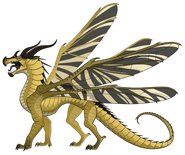