Wings of Fire Wiki
Register
Don't have an account?
Sign In
Advertisement
in: Characters, Females, SkyWings,
and 21 more
English

"Oh, really? You think you've changed so much? I know you. You like killing dragons. You've always liked it. It's one of the things I can stand about you — none of the simpering, moaning guilt another dragon might have. You were born to burn your enemies. And mine. Mostly mine."
— Scarlet to Peril, Escaping Peril

Over 30 years at death

Neck snapped by Ruby during her royal challenge

The Hidden Kingdom,
The Brightest Night

Scarlet was an adult female SkyWing who was introduced in The Dragonet Prophecy. Despite being challenged fourteen times for the throne, she reigned as the SkyWing queen for approximately twenty-nine years until she was killed by Ruby in a royal challenge.

Scarlet was strong,[1] with dark orange scales[2] and bright yellow eyes[3] that were as sharp as talons.[4] Her orange[5] wings were enormous,[6] and their top side[7] had rubies embedded around the edges.[8] A row of tiny rubies[9] and diamonds[10] were also embedded between the scales over each of her eyes.[9]

She was slightly bigger than Clay,[9] but smaller than Kestrel[11] and Dune.[12] She was usually wreathed[13] in white smoke emitting from her nostrils in a steady stream that would coil thickly around her horns.[7] She also had a deep,[14] slithering voice.[4]

During her reign, a fine coat of golden chain mail adorned her, hung with rubies and amber drops around her torso,[9] as well as a circlet made of gold and diamonds,[15] medallions around her neck, and rings on her claws.[16] Occasionally, she would also wear a diamond-studded vest with small black chain links.[17]

After being severely injured by Glory's venom and being imprisoned by Burn, all earlier ornaments were gone[16] except for the rubies above her[16] left[18] eye. The other side[16] of her shimmering orange face[19] was melted into a hideous dark mess[16] that misshaped her snout[20] and revealed a glimpse of her jawbone underneath. One eye was pulled down and out of proportion with the rest of her face.[16] She was referred to as "Melty-Face" by a SkyWing dragonet.[21]

During the time after her escape from Burn, Scarlet became thin and ragged[22] but began adorning herself with jewelry again once she briefly managed to regain the SkyWing throne.[23]

Scarlet was insane and murderous, and other dragons very rarely argued with her.[24] Living in excess, Scarlet took pleasure in adorning herself and her throne room with gemstones and precious metals, and would grow petulantly upset when she did not get her way.[9][25] She thought very highly of herself, and had portraits made in her image.[26] She was not above lying and manipulation, and would go to great lengths to control dragons around her to do her bidding, particularly Peril.[27][28][29] She was a smooth liar, sly and cunning with her words,[30] as well as ruthless and unbothered by killing or having dragons killed, including her own daughters.[31] She used fear of her violent wrath to prevent her subjects from doing things she disliked,[32] and she rarely lost challenges to her authority.[33] Chameleon also stated that she was usually very convincing.[34] She rarely trusted other dragons,[15] and Moonwatcher described her mind as loud, angry, and all over the place. Ruby described her as "The Super-Murdery Queen of the Mountains."[35]

Her self-indulgent need for 'thrilling' forms of entertainment meant that her violent arena, fed by the war, was very important to her.[36] She wished to continue the war, heedless of its impact on her subjects, for her personal entertainment and to keep her throne secure.[37] She also kept a close hold on Peril, her arena champion, who was encouraged to draw out battles for Scarlet's entertainment.[38]

She was shown to be opportunistic, taking advantage of what Chameleon could do very early on.[42] She also seemed to find it amusing and easy to manipulate Peril, despite the latter wanting to kill her. When changing dragons with the jewelry Chameleon provided, she put loyalty to her as one of the first criteria most of the time, showing how she expects all her subjects to feel the same.

Scarlet allied with Burn during the War of SandWing Succession and found the war a useful source for fighters in her arena. Later, after being wounded by Glory, Burn locked her up in her stronghold, and this changed the relationship between them drastically.

Upon discovering Chameleon disguising as Soar, Scarlet offered him to work as her spy in exchange for treasure. Their relationship was mutual due to the offer, as Chameleon was greedy for treasure and was willing to work for such. She trusted Chameleon with multiple spying missions, such as using a Cirrus mask to infiltrate the Talons of Peace.

As a dragonet of destiny, Scarlet toyed with him during his imprisonment. She is aware of his friendship with Peril and focused on destroying it. As with the other dragonets of destiny, she wanted him dead.

Scarlet initially saw Glory as a useless and lazy RainWing, turning her into a piece of art. She also said she had big plans for her. After getting injured by her venom, Scarlet loathed the RainWing for ruining her looks. She wanted Glory dead more than all the other dragonets of destiny, as hinted when Icicle goes for her to make up for her failed murders and having Chameleon enchant a MudWing head with Darkstalker's scroll to look like Glory to taunt the dragonets of destiny. Scarlet says that Glory gave her a sickening feeling, which she would not call fear.[43]

Scarlet was like an adoptive mother to Peril, since she took her in when she was very little and let her grow up in the SkyWing palace. She manipulated her to become her champion and made her so that she did not feel any guilt when she killed. When Clay came along, Scarlet tried to make her stay away from him so she would not try to escape. She also tricked her into eating the black rocks. In Escaping Peril, she had Chameleon enchant Peril to be loyal to her. Scarlet tricked the firescales in every way. It backfired eventually when Peril broke free from the spell. Scarlet considered Peril an old favorite.[43]

Ruby is Scarlet's daughter, making her eligible for taking the throne. She was formerly Tourmaline, whom Scarlet enchanted to be a softer, more obedient dragon in order to maintain her power. Despite wanting to keep the throne, Scarlet kept her alive in order to have at least one live heir, though they did not have a strong relationship. She was ultimately killed by her daughter during the challenge.

Scarlet does not see her son as a threat because he cannot inherit the throne. As such, she seemed to be on good terms with him, letting him announce arena battles as well as argue for persecution.

"Now really, this is getting insulting. You're in my territory. Apparently you're living under my mountain. I am only the most important dragon for hundreds of miles. How dare you not recognize me?"
― to the dragonets of destiny (The Dragonet Prophecy, page 110)

"SMOLDER! I HEAR YOU DOWN THERE. If you don't bring me more water right now, I swear I will catch that scavenger of yours and EAT HER."
― to Smolder (The Brightest Night, page 58)

"You think Burn is what you have to worry about right now. She's not. I am. I'll be free soon … free … and I'll be coming for all my enemies … think about that while you try to fall asleep … what I'm going to do to your friends when I get my claws on them … how messy and thrilling it's going to be …"
― to Sunny (The Brightest Night, page 113)

"Oh, you mean me? Is that your clever plan? Find the most deadly queen in Pyrrhia, kill her, and take back your brother? Even if you could kill me, you would never find your lost IceWing. Never. The prison I've got him in is far too clever for that."
― taunting Winter, about Hailstorm (Winter Turning, page 170)

"What use are diamonds to me? If I want something, I don't pay for it; I take it. And right now, groveling prince, I only want two things: my throne back — and vengeance."
― to Winter (Winter Turning, page 171)

"So you're his only hope. Or at least, you were. It's all over now, though. I can see that you're far too useless to kill anyone for me. My only remaining pleasure is watching your face as I tell you your brother will be dead by morning."
― to Winter, about executing Hailstorm (Winter Turning, page 172)

"Does it look like I have the most fabulously dangerous new toy? Because that's exactly what this is."
― to Ruby, about Peril (Escaping Peril, prologue)

"Oh, really? You think you've changed so much? I know you. You like killing dragons. You've always liked it. It's one of the things I can stand about you-none of the simpering, moaning guilt another dragon might have. You were born to burn your enemies. And mine. Mostly mine."
― to Peril (Escaping Peril, page 22)

"I destroy anyone who opposes me! I will have my vengeance and I will get my throne back! This is just one of the dragons I'll kill — and you'll all be next!"
― to Ruby's soldiers (Escaping Peril, page 27)

"You can't do that. Not until I have the throne back. No one can know that you're powerless now — I need the threat of you, which should be as effective as the actual fire of you, after the last seven years. Once we've secured the throne and I've killed Ruby, then you can be as dippy and cuddly and stupid as you want."
― to Peril (Escaping Peril, page 168)

"When you win? How thrillingly hilarious. After all the challengers I've killed, you think you stand any chance at all? My mousy daughter who can barely speak in a room with more than two other dragons in it."
― to Ruby (Escaping Peril, page 224) 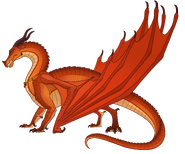 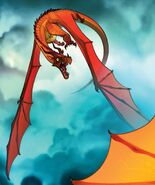 Ex-Queen Scarlet on the cover of Escaping Peril, by Joy Ang

Scarlet on the cover of the Official Wings of Fire Coloring Book by Brianna C. Walsh

Scarlet from The Dragonet Prophecy (graphic novel), by Mike Holmes 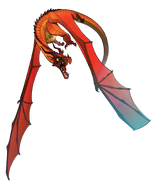