"You're to come before the Outclaws as well. Thorn wants to know why you're following those scumdwellers."
—Six-Claws to Sunny, The Brightest Night

Six-Claws is a male SandWing Outclaw and one of the most loyal dragons to Queen Thorn. He is the main protagonist of Deserter. He has six claws on each front leg instead of five claws, as most dragons would normally have. He seems to be a little frustrated with his mother for making it so that every time he says his name, every dragon automatically looks down at his claws, to see if he really does indeed have six claws. Princess Burn wanted Six-Claws's claws for her weirdling tower as soon as he died in the war. Six-Claws is the father of Ostrich and the mate of Kindle. He was one of the only dragons who knew about Thorn and Stonemover's relationship, the other being Armadillo. Before he joined the Outclaws, he was a high ranking general in Burn's army.

In Deserter, Deathbringer tried to convince him to become an Outclaw, right before Burn tore Dune's wings to shreds. He brings Dune to the Scorpion Den, accompanied by Kindle and they become Outclaws. Thorn then later accused Dune of stealing her egg in The Brightest Night.

Six-Claws has light yellowish-brown scales[1] and large wings[2]. His side is marred with old scars, and he has six claws on each foreleg, instead of the usual five[3]. In book five, The Brightest Night, Six-Claws is described as about 10 years older than the new SandWing queen Queen Thorn, who is about 21 years of age, making Six-Claws about 30 years or older.

Six-Claws is a very loyal soldier and is one of the few dragons Thorn is capable of putting her complete trust into. He is very kind and treats Sunny like a family member and Thorn as his leader. He loves his daughter, a dragonet named Ostrich, dearly, and had also loved his family. He is gruff and firm, but he is also loving and protective. He is witty, similar to Qibli, and he can figure things out somewhat quickly. He appears to have a sense of humor, as well as common sense as to getting out of Burn's army before he got himself killed.

Six-Claws was a dragonet when the book began, about five years old. He and his family were loyal subjects of Queen Oasis, and he remarked to his parents that no one would want to kill her because she was the best queen ever.

Prince Smolder came to Six-Claws, asking if he could deal with young Princess Blister and Princess Burn, who seemed to be plotting something. Six-Claws quickly came to the realization that it must involve Princess Blaze, who they soon realize was missing. Six-Claws does not find the princess at first, but met a four-year-old SandWing, Dune, who gave advice on where to find her - the royal treasury, because of her treasure obsession. However, before the two dragons check the treasury, they saw Blaze out in the middle of a sandstorm. Six-Claws told Dune to get help and flew over to protect the princess. He told her to come back to the palace, and she refused, saying that she needed to find her crown. Six-Claws flew her back into the palace, rescuing her from certain death. King Char thanked Six-Claws for saving his daughter, while simultaneously scolding Blaze for her rude comment directed towards his six claws. Char invited Six-Claws and Dune to become part of the army. They accepted and stayed in the army, which was where they remained for a while.

Six-Claws and Dune, along with Scald and Singe, were attempting to comfort Smolder after the disappearance of his girlfriend, Palm. They heard chaos and roaring outside, and exited to find that Oasis was dead, and there was no sign of the killer. Six-Claws sided with Burn because his mother did, and Dune followed his lead.

After around twelve years, Six-Claws and his troops were shown returning from a battle on the search for Blaze. They met up with Burn, who told Six-Claws that he needed to move all his troops into the Mud Kingdom. An argument ensued, as Six-Claws believed it was impractical. A mysterious dragon, most likely Deathbringer, appeared in the shadows and told him to abandon his position as general, as Burn was too cruel to win the War. In an attempt to force him to work with her, Burn ripped one of Dune's already damaged wings, disabling him. Six-Claws escaped to the Outclaws, along with Dune and Kindle, a nurse in the army, and the mother of his daughter, Ostrich.

Six-Claws, a general for Princess Burn at the time, was the next dragon Deathbringer was assigned to kill. However, Deathbringer decided he would not kill him but convinced him to leave Burn's side of the war.

Six-Claws escorted Sunny when she came to the Scorpion Den and brought her before Thorn. He laughed when Sunny said, "oh, your parents were feeling creative". Sunny considered the possibility that he might be her father, because of his six claws and her lack of SandWing tail barb, but then she supposed that she was only desperate to discover who her parents were.

Once Thorn left to deal with a fire, Addax approached Six-Claws with his daughter, Ostrich, and forced him to choose between saving his daughter or following orders. Sunny willingly went with Addax to spare Six-Claws the choice and told him to lie to her mother about why she left. The next day, Addax allowed Ostrich to return to her father.

Once Ostrich was returned, Six-Claws told Thorn about Sunny's abduction and participated in the Outclaws' assault on Burn's stronghold. Near the end of the battle, he refused to retreat with the rest of the Outclaws until he was sure Thorn and Sunny escaped. At Burn's stronghold, he and Qibli were seen bowing to Queen Thorn.

Fierceteeth threatened to tell on Saguaro about her unknown plan to Six-Claws, who is still loyal to Thorn. Six-Claws was one of Thorn's most trusted guards during Prisoners.

After the fire in the history cave, Moon heard Sunny think about a six-clawed dragon to take home some dragonets at Jade Mountain Academy. Later, after Princess Icicle almost rips off Qibli's earring, he winces and thinks that Six-Claws thought it was idiotic to get the earring.

Though Six-Claws was mostly mentioned by name in the tenth Wings Of Fire installment, he does appear when Queen Thorn's Stronghold gets damaged by Qibli, who sent a sandstorm on it with the weather bracelets. Afterward, Six-Claws and his daughter Ostrich helped distribute Qibli's earrings amongst the tribe, trying to find survivors still outside from the sandstorm, and escort Ex-Princess Onyx from the stronghold.

Six-Claws returned afterward in the epilogue, helping repair the damaged parts of the stronghold.

"We'll be more cautious in the future. We'll find a dragon we can truly trust and respect, and then we'll have a reason to be loyal. I believe that dragon exists. You'll see." - To Dune and Kindle

"We've only been looking for a few weeks." - To Burn, about Blaze

"Because you never leave dragonets in danger." - To Dune

"I take orders from Thorn and no one else." - To Addax

"Back into her army? Why would you want that? You could be safe here. The war never comes to the Scorpion Den." - to Addax, about him wanting to rejoin Burn

"We didn't catch the viper yet, but we've contained the fire, for the most part. So we're either really lucky or really unlucky, if there really is a viper out there. Thanks for asking." - To Sunny

"Ostrich. Don't be scared. I won't let them hurt you." - To Ostrich

"Sisters are always up to something." - To Smolder

"You're very clever." - To Ostrich

A typical SandWing by Joy Ang 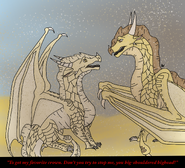 A scene from Deserter, by Alaska 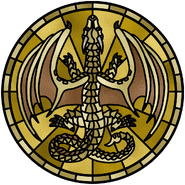 SandWing Sigil by Platypus the SeaWing 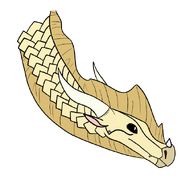 Add a photo to this gallery
Show/Hide Gallery

Retrieved from "https://wingsoffire.fandom.com/wiki/Six-Claws?oldid=5034774"
Community content is available under CC-BY-SA unless otherwise noted.