Wings of Fire Wiki
Register
Don't have an account?
Sign In
Advertisement
in: Characters, Males, SkyWings,
and 10 more
English

"Apparently I'm a weird thing, because no one else is this color, and SkyWings are supposed to have fire."
— Sky to Wren about his scale color, Dragonslayer

Alive (as of The Flames of Hope)

SkyWing representative on the journey to Pantala

The Flames of Hope

Sky is an adult male SkyWing who was introduced in Dragonslayer. He was hatched with an inability to breathe fire and is much smaller and weaker than normal SkyWings. He is the son of Chameleon and Kestrel, and the twin brother of Peril.

Sky is skinny,[1] with pale orange scales[1] the color of the palest sunset over the mountains.[2] His enormous, baby-seal[3] eyes are a pale, washed out,[4] watery blue, like a frosted-over puddle.[5] Snowfall described his grin as sweet-as-baby-hedgehogs grin.[4]

Sky often smiles with huge, ridiculous grins.[6] He speaks and behaves very oddly, and is adoring, rapturously delighted,[7] smiley,[8] kind,[9] relaxed, innocent,[10] adorable,[3] dreamy,[11] and hopeful.[4] He laughs often.[12] He is goofy, kind, and gentle in nature, as well as giggly and excitable. Despite his normally soft nature, he can become jealous and even angry, especially when those he loves are in danger. He loves all animals, especially small creatures with shells, such as snails, hermit crabs, and baby turtles, becoming protective and/or excited when he sees them. He is a vegetarian, most likely because of his love for animals. When he was still a baby, he cried for an animal that Wren had killed. He used to stare at snails for ages, until Wren dragged him away. He is also somewhat insecure about his inability to breathe fire. Wren describes him as smart and perfect. Snowfall said that he reminds her of Mink,[13] most likely referring to his innocence. Tsunami once described Sky as "the least SkyWingish SkyWing ever.”[14] Wren mentioned that battles scared him deeply and that he was "not that kind of dragon".[15]

Kestrel was Sky's mother. He was afraid of her, shown when Wren rescued him from the river and she flew over them, roaring. Sky believed that his mother wanted to kill him, shivering greatly whenever he saw her. When he spied on the dragonets of destiny with Wren, he trembled at the sight of Kestrel yelling at the dragonets.

Sky and Pineapple became great friends during their travels to Pantala and were both on the stealth team together. Sky wanted to rescue Pineapple and the other members of their team, when they got captured by the HiveWings.

When he met Snowfall, she thought he was one of the weirdest dragons ever, although he probably took no notice. When Snowfall compared her friends to friendly turtles on the inside, Sky gave her a gigantic grin.[16] Unknowingly, Snowfall felt worried for him,[17] and wanted him to be able to access her Kingdom whenever he needed her.[18] Sky never knew that Snowfall built him a small snail shaped sculpture.[19] Snowfall will miss him and get sappy and sentimental about him.[20]

Sky was found by Wren after he survived what they thought was Kestrel's attempt to kill him. She hid him and decided to spend her outcast life with a dragon instead of the humans of Talisman, who ruthlessly threw her out.

Initially, Wren was a mother figure to him, raising him and teaching him her language. As they grow up, Sky considers Wren an equal and teaches her some Dragon as well, and they have developed a "hybrid language" between them. The two often rely on each other and since they grew up alone; they travel together on every journey, never separate for more than a day, and always worry over each other. On multiple occasions, Wren frets over Sky and reaches out in great lengths to save him. The bond between them is extremely powerful, to the point where Sky agrees to help Wren even on occasions like establishing peace between dragons and humans, starting from weakening the Dragonslayer and dragonmancers' rules over their cities. Sky is often disapproving of how much Wren yells and he makes jokes about her temper.[21] Sky considers Wren to be family.[22] They traveled to Pantala together as representatives of the SkyWings and Humans respectively, to stop the Queen Wasp and the othermind.

"Isn't it exciting? […] Maybe they have dragon books! I don't know how to read Dragon. But maybe we could figure it out together."
― to Wren (Dragonslayer, page 211)

"Wren, I'm sure no one will even talk to me […] Because my face strikes terror in the hearts of dragons everywhere!"
― to Wren (Dragonslayer, page 213)

"No, you have the most lovely face […] You're the cutest, best pet any dragon could ever have."
― to Wren (Dragonslayer, page 213)

"What if I give him a different pet? A better pet! How about a SNAIL?! Snails are AMAZING! Have you SEEN them? Or a TURTLE! I could give him a turtle! Awwww, don't you love turtles? With their little flippery flippers! And their sweet little shells! And their tiny heads HAVE YOU SEEN THEIR TINY HEADS? They look like they're smiling! Little tiny turtle smiles! Wouldn't he love a turtle?"
― to Snowfall about bargaining for Daffodil with Winter (The Dangerous Gift, page 217-218)

"She thinks I'm adorable."
― to Wren about Snowfall (The Dangerous Gift, page 219)

"No one! Sorry! Nothing! Never mind, I am not needing the scavenger after all, everything great, nice to meet you, bye forever!"
― to Snowfall (The Dangerous Gift, page 219)

"No! [...] Wren, you came to save me in the Kingdom of Sand even when it was dangerous! That’s what we do for friends! And I finally have dragon friends! Dragon friends who need saving!"
― to Wren about saving their friends (The Flames of Hope, page 60) 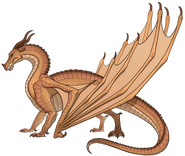 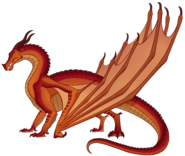 Sky from The Dragonet Prophecy (graphic novel), by Mike Holmes

Sky on the cover of The Flames of Hope, by Joy Ang