The Sky Kingdom is a kingdom in Pyrrhia and home of the SkyWings. It is located on the "wing" and part of the "torso" of the dragon-shaped continent of Pyrrhia, and it stretches across the entire northeast and center, reaching to the outskirts of the Mud Kingdom, the Kingdom of Sand, and the Rainforest Kingdom. It was formerly ruled by Queen Scarlet, and is currently under the reign of Queen Ruby.

The Sky Kingdom is mostly consisted of mountains, with temperate forests and some meadows in the lower areas. There are several lakes and rivers, and the areas to the north are snowy and home to boreal forests. Numerous caves run beneath the kingdom. The Sky Kingdom is located in central and northern Pyrrhia and it contains the Claws of the Clouds Mountains, the SkyWing palace to the far north, Jade Mountain, and the cave where Kestrel, Webs, and Dune raised the dragonets of destiny for six years. The Winding Tail River separates the Sky Kingdom from the Mud Kingdom. The area around the river is covered by rocky sloping hills leading to the river plain and north towards Possibility. The landscape there is flatter and contains groves of trees and scraggly clumps of wishful forest.[6]

Southwest of the SkyWing palace,[7] there is a valley that is dotted with clumps of small white flowers.[4] There are mountains and rivers, as well as lakes, in the valley.[3] On one side of the lake, there is a wreckage from a rough structure. Long branches stripped of their leaves are scattered across the ground, and vines still tied in knots lay in crushed piles. The whole mess is covered in ripped up flower petals of roses, violets, and daffodils.[3] There is a forest bordering the lake, as well as dirt, shrubs, and streams. The grass waves peacefully, the quiet trees are full of fruit, and it seems as though no dragon talons have ever disturbed it. There is a large, mountainous eye-shaped rock formation overlooking the valley, as well as mountain crags and folded, crooked peaks.[8] There is a stretch of rocky slope leading up to a peak, where several flat ledges and outcroppings overlook the valley. There are several boulders and shrubs.

A short flight from the SkyWing palace, there is a gap between two mountain peaks that leads into a quiet,[9] mossy valley dotted with sheep.[10] The meadow also contains patches of ivy, trees,[11] small yellow flowers, and at least one boulder.[12]

Far south of the SkyWing palace, there is a part of the mountains that are jagged with canyons and steep ravines. At the bottom of one ravine, there is cave deep enough to crawl into and light a fire without anyone being able to see.[13] The interior of the cave contains ledges.[14]

At the very south of the Sky Kingdom is Jade Mountain, the tallest mountain in Pyrrhia, and the location of the Jade Mountain Academy. There is rumored to be a "dragon of Jade Mountain," which is friendly to the Talons of Peace, that was later revealed to be Stonemover, Sunny's NightWing father, and Thorn's former partner in The Brightest Night.

The Diamond Spray River begins at the base of Jade Mountain, in which the SkyWing palace rests and flows through the middle of SkyWing territory. The Kingdom of Sand borders it in the southwest, while the Ice Kingdom is northwest. Assuming that the SeaWings rule the entire northern ocean, the Sky Kingdom also borders the Kingdom of the Sea to the northeast.

Numerous scavenger dens have been reported in the Sky Kingdom.[15] The Indestructible City, one of the most well-known scavenger dens, notorious for their fortified walls and tendency to fight back against dragons, which is located near a bend in the Winding Tail River and west of the Mud Kingdom, and Talisman, which used to be a den for four treasure smugglers, going by the names of Trout, Gorge, Crow, and another currently unnamed human, which is located by the Claws of the Clouds Mountains and overlooking a river that directly leads to the SkyWing palace.

Ruby's palace is located in the upper segment of the Sky Kingdom and is described as a huge fortress carved from a mountain.

More tunnels are blasted out every day by SkyWing subjects, with half of the palace inside the mountain, and the other half is open to the sky and heavily defended. The castle is said to be damaged from battle, with collapsed towers and scorch marks from fire attacks. Clay, Tsunami, and Starflight had been taken there in the time of Queen Scarlet and the palace had been described with gold talon prints, gold veins on the walls and floors, and the throne room "as if a giant dragon had stumbled around the room, vomiting gold all over the place."[16] It is noted in Escaping Peril that all of the gold has been removed by the order of Queen Ruby. It is also the home of the SkyWing Royal family.

Dragons captured in battles against the SkyWings were sentenced to fight in gladiator battles to the death in a huge, bowl-shaped arena. 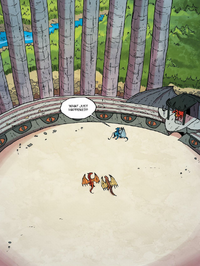 A fight was held almost every day for Queen Scarlet's amusement. The prisoners were kept on tall rock spires with no bars, spread out in a circle around the perimeter of the arena. The dragons were held down by metal clamps, and wires that are wound around their limbs stretch across the arena, connecting all of the prisoners.

Dragons were promised freedom after a set amount of arena victories. This never occurred, due to Scarlet's champion Peril being sent to fight any dragons who surpassed three or four wins.[17] SkyWings, MudWings, and sometimes SandWings watched from stands. Occasionally, the gladiators fought groups of captured scavengers. Some prisoners have even tried to commit suicide (Horizon) rather than continue to fight.

The arena is currently being used as a hospital for war veterans and wounded soldiers.

When the dragonets of destiny were captured along with Kestrel by Scarlet, they were brought to the SkyWing Arena and Queen Scarlet's palace by soldiers and made prisoners. The dragonets were then forced to battle in the arena. With the help of Glory's venom, Clay defeated Fjord, the IceWing opponent he was pitted against. Tsunami killed a couple of scavengers, as well as Gill, a SeaWing driven mad by lack of water, who was revealed to be her father in The Lost Heir. During Clay's time at the arena, he and Peril met and they became friends.

Glory mentioned her experiences in the Sky Kingdom frequently throughout the book.

Morrowseer flew the alternate dragonets and Starflight across the ocean. They ended up in the Sky Kingdom, and Morrowseer took them to an outpost far away from the palace made for watching for IceWings, in case they try to attack from the north. He tested them and told them to convince them to switch their alliance from Burn to Blister. Starflight and the other dragonets failed, and Morrowseer killed all the SkyWings.

Jade Mountain Academy is located in the Sky Kingdom.

Moonwatcher, Winter, Kinkajou, and Qibli first arrived at the Sky Kingdom in search of the Talons of Peace for answers about long-lost Scarlet and Hailstorm. The dragonets passed the Winding Tail River and the Indestructible City, eventually reaching Scarlet's hideout at the mountainside. They stopped by the borderlands between the Sky Kingdom and the Kingdom of Sand to find a doctor for Kinkajou.

The Sky Kingdom was shown when Scarlet returns with Peril and Soar. At the time, Peril was under an enchantment, but when released she witnessed Queen Ruby and Ex-Queen Scarlet fight for the throne in the arena, to which Ruby won. Peril gained her trust during this time by helping both Ruby and Prince Cliff and was invited to stay in the Sky Kingdom if she wished, which she declined.

The Sky Kingdom on the cover of Escaping Peril, by Joy Ang 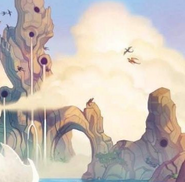 The SkyWing palace on the cover of The Dragonet Prophecy, by Joy Ang

The SkyWing palace from The Dragonet Prophecy (graphic novel), by Mike Holmes

The SkyWing palace from The Dragonet Prophecy (graphic novel), by Mike Holmes 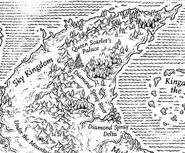 The Sky Kingdom close up on the map of Pyrrhia, by Mike Schley 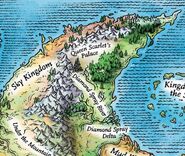 The Sky Kingdom close up on the colored map of Pyrrhia, by Mike Schley 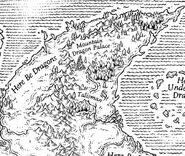 The Sky Kingdom close up on the of Pyrrhia in Dragonslayer, by Mike Schley