"We need him out of the kingdom. Or dead. Otherwise someone else will marry him and have dragonets. I haven’t forgotten that we’re here to solve your problem too."
—Snowflake to Snowfox about Prince Arctic, Runaway

"Seems kind of like a waste of my time. Unless you're having trouble coming up with an idea for yours."

Snowflake was a female First Circle IceWing. She was in an arranged marriage with Prince Arctic set up by Queen Diamond, but the two never had passion for each other. She was described to be pretty in a boring, glassy way with silvery-white scales like the moon[1], the way Queen Diamond supposedly liked. She was thought of by Arctic as being incredibly boring, unmemorable, and to have almost no personality; however, after she finally showed irritation when Arctic was frustrated with her, he guessed that she did have a personality, "repressed fury," which Snowflake's POV proves to be correct. At the end of Runaway, she had a permanently damaged wing due to Arctic catching Foeslayer's fire in his talons and throwing it at her. During their escape, Foeslayer had sympathetically guessed that Snowflake would never fly again. This may also be the reason why Princess Snowfox wanted to wipe out the NightWings without remorse, as the two had fallen in love and she wanted vengeance.

Snowflake has silvery-white scales like the moon, and long, whip-thin tail like most IceWings, and icy blue eyes. She has a chain made of thin metal links with one ring hooked onto it, indicating that she is a First Circle dragon. One of her wings is charred and pocketed with singed holes from a deadly fireball in Runaway, most likely altering her ability to fly.

Snowflake is at first shown to be very quiet and respectful. She is thought to be boring, uninteresting, and shallow, and was described as 'without a personality' by Arctic in Darkstalker (Legends). Arctic classified Snowflake as "pretty in that boring, glassy way Diamond liked". Diamond intended for Arctic to marry Snowflake. However, in Runaway, she is given more depth to her "personality" and mind, showing how she rages all night long at everything in her life and showing her true personality as suppressed rage.

Secretly, Snowflake is always angry. It frustrates her even more when she realizes that no one can see that she is unhappy. However, she is forced to follow strict rules that were enforced on her since she was a dragonet. Snowflake is constantly wary, as she constantly has to deal with "First Circle Traps" that often test both her body and her mind. She is not very good at defending herself in arguments and thinking of sharp, craftily-worded rebuttals. She often thinks of these comebacks too late, often at night. Princess Snowfox is the only dragon that knows what Snowflake is truly like, noting that she has "a depth of dark water below her ice".[2]

Snowflake was one of the three PoV's in the "Winglets" Ebook, Runaway. She first appeared in the very first chapter, watching Foeslayer and Prince Arctic with slight jealousy etched all over her face.

Later on in the book, it was explained that she was chosen by Queen Diamond to be Prince Arctic's fiancee because she was very quiet, and Diamond was hoping that her quiet and submissive traits would pass on to her and Arctic's dragonets.

She and Princess Snowfox met and talked about things that they could do to help Snowflake get rid of Arctic and help Snowfox ascend to the throne. While they scheme and plan, they become close friends- and perhaps even more than that.

When Arctic was escaping with Foeslayer, Prudence, Starclaws, and Discretion, Foeslayer blasted fire at Snowfox. Arctic then used his animus powers to direct the blast towards Snowflake, who suffered severe burns to one of her wings. Luckily, Snowfox was able to put out the fire on her wing, but it may mean Snowflake will never fly again.

Snowflake appeared in the prologue of Darkstalker (Legends) informing Arctic that his presence is required by his mother, Queen Diamond, in a diplomatic meeting with the NightWings. She may have been upset because he didn't say her name, because he couldn't remember. After Arctic grumpily follows her to the meeting (much to her relief) Arctic suddenly remembers her name and the fact that they are engaged, though he keeps the latter fact to himself so as to not seem like an idiot. As they ventured to where the NightWing diplomats were waiting for them, Arctic asks Snowflake what gift she would give the tribe if she were an animus.

She replies that she doesn't know, and after Arctic commands her to think about it and tell him soon to which she responds to brusquely saying "Seems like kind of a waste of my time unless you are having trouble coming up with yours". This shuts Arctic up and they go out to the balcony, where they meet Foeslayer trying to keep herself warm while watching the sunset. Arctic eventually annoys Snowflake into leaving. The NightWing, who eventually (and unintentionally) introduces herself, playfully teases Arctic about not being able to remember his own fiance's name, and then later convinces Arctic to escape the Ice Kingdom with her.

"Your mother sent me to tell you that the NightWing delegation has arrived."

“You monster! I knew those dragons! How could you kill them? For a NightWing? What is wrong with you?” - To Arctic after he unintentionally killed a group of pursuing IceWings.

"Please accept my apologies, for I do not recognize your face. I hope I am not bringing great dishonor upon my family." - To Snowfox, using a stock phrase because she doesn't recognize her.

"He's contemplating his noble reflection in the ice cubes." - To Snowfox.

“We need him out of the kingdom. Or dead. Otherwise, someone else will marry him and have dragonets. I haven’t forgotten that we’re here to solve your problem too." - Snowflake conspiring with Snowfox on how to get rid of Prince Arctic.

Snowflake is shown to despise Arctic, and she thinks of him as an "arrogant, entitled, patronizing, obnoxious, preening, fat-headed son of a walrus she'd ever met".[3] She notes that he acted as though she were barely Seventh Circle and as though she had an obligation to entertain him when he was bored, and as though she had no brains in her head whatsoever.

However, when she witnesses Arctic killing several IceWing guards by enchanting several spears, Snowflake's hate for him amplifies and she slashes at his snout, saying he doesn't deserve to live or be happy with Foeslayer after what he's done.[4]

Snowflake teamed with Snowfox against Arctic and Foeslayer. They are in a confirmed relationship and are extremely close to each other. Their relationship with each other is first developed when they plan to get Arctic out of the Ice Kingdom so Snowfox could challenge Queen Diamond instead of Snowflake having dragonets with Arctic. It was noted by Snowflake that Fox wanted to protect Snowflake with a fierceness that matched Snowflake’s own desire to get Fox on the throne. Snowflake described her as "A dragon I would do anything for. That’s something I never thought I’d see."[5] 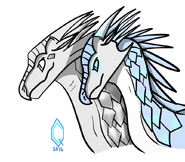 Snowflake on the right. Art by QueenClam 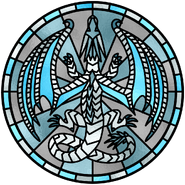 Snowfox and Snowflake, by BuzzieOfTheSkyWings

An actual snowflake
Add a photo to this gallery