Wings of Fire Wiki
Register
Don't have an account?
Sign In
in: Characters, Females, RainWings,
and 7 more
English

"We're going to be exploded and covered in lava and melted and dead!"
— Splendor on the NightWing island while the volcano was erupting, The Dark Secret

Alive (as of The Dark Secret)

Captive of the NightWings

Splendor is an adult female RainWing who was introduced in The Dark Secret. She was one of the six queens who took turns ruling the tribe. She was a prisoner of the NightWings until the events of The Dark Secret.

Splendor is described as skeletal and drab-grey while she was in the NightWing Dungeons. However, her lean figure may be due to lack of nutrition while in the dungeons, and her coloration a result of her reactions to the miserable condition she was in.[1]

According to Mangrove, Splendor was the first of the RainWings to be kidnapped by NightWings. Kinkajou later mentioned her as one of the captured RainWings, when she was in the NightWing fortress. The other RainWings had brushed off her disappearance, and the other queens just skipped her turn.

It was revealed the NightWings assumed that if they captured the RainWings' queen, the tribe would obey them, seeing their queen at their mercy. However, this plan failed, as there wasn't much of a RainWing monarchy, and most RainWings barely even noticed her absence. Splendor accidentally sprayed Vengeance with venom when he captured her, scarring him and making him hate RainWings.

Starflight and Fatespeaker saw her as one of the captives in the dungeon. Deathbringer had been locked in a cage beside Splendor. Shortly before the volcano erupted, Starflight and Glory freed her. She was described as terrified, her scales an acid green with fear, and wailed that there was lava coming through the walls and that they were all going to die. She ignored Starflight and Glory's attempts to calm her down, but despite her shock, she survived and made it back to the rainforest.

"We don't have any more minutes. We're going to be exploded and covered in lava and melted and dead!"
― to Starflight (The Dark Secret, page 268) 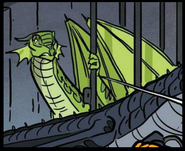