Wings of Fire Wiki
Register
Don't have an account?
Sign In
Advertisement
in: Characters, Males, SeaWings,
and 8 more
English

"Well, I wasn't going to eat it. We are on an island. I think someone should be able to bring me a fresh fish, considering who my father is and the fact that I'm a dragonet of destiny. I mean, really."
— Squid to Ochre on eating the NightWing carrion, The Hidden Kingdom

Squid is an adult male SeaWing who was introduced in The Hidden Kingdom. He was a member of the false dragonets as a replacement for Tsunami, and he currently resides with the Talons of Peace.

Squid has emerald-green scales[1] and green wings[2]. He is rather small, barely the size of a three-year-old dragonet[3]. He is much scrawnier than Winter[4] and smaller than Riptide.[5]

Squid is obsessed with treasure, gold, and jewels, even more than fame and peace. He claims that all of the Talons are 'lame' because none of them gave him treasure. He is seen as extremely whiny and considers Ochre, Viper, and Flame as bullies, and Fatespeaker to have "lost her marbles."[5]

In addition, he often tries to lord it over the others that his father, Nautilus, is the leader of the Talons of Peace, although this only annoys the false dragonets and usually leads to them attacking him. He is shown to be cowardly and childish when it comes to real work. Squid is frequently whiny, as he believes he is famous and gets irritable when he is not treated like it. He believes he is much too important, being the son of the leader of the Talons of Peace, to interact appropriately. He is confused and upset when Morrowseer sends him away, saying that his father is the leader of the Talons and that everyone had to treat him nicely, showing that he thinks very highly of himself.

When Morrowseer called him "small and hardly a four year old," he claimed that he "has a big personality." In fact, Squid claims that his big personality makes up for his small size.

"Can I be the one to push her off the cliff?"
― about getting rid of Fatespeaker (The Dark Secret, page 73)

"Well, I wasn't going to eat it. We are on an island. I think someone should be able to bring me a fresh fish, considering who my father is and the fact that I'm a dragonet of destiny. I mean, really."
― about the NightWing carrion (The Hidden Kingdom, epilogue)

"They nearly killed me! Just like I said they would! I quit! I don't want to be in this prophecy anymore! There's no treasure and it's boring and stupid and I'm hungry and I hate your island and I want to go home!"
― to Morrowseer (The Dark Secret, page 134)

"It's not fair! It's not my fault that some other SeaWing is better than me."
― to Morrowseer (The Dark Secret, page 135)

"Fine fine FINE. You know, my dad used to be the leader of the Talons of Peace. I don't know why he lets you boss him around. When he wanted to step aside, he could have let me take over, I mean, what was wrong with that plan…"
― to Riptide about Nautilus (Winter Turning, page 140) 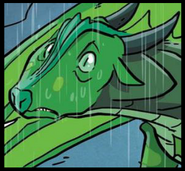