Wings of Fire Wiki
Register
Don't have an account?
Sign In
Advertisement
in: Characters, Females, SkyWings,
and 9 more
English

"You have animus dragons, and you let them live?"
— Sunset to Lagoon, Darkstalker

Killed by Albatross in the Royal SeaWing Massacre

Sunset was an adult female SkyWing who was introduced in Darkstalker. She was the daughter of Queen Carmine, and was one of the nine victims murdered in the Royal SeaWing Massacre.

Sunset had shiny, polished red scales the color of hibiscus petals, drops of blood, or giant rubies.[1] She had amber eyes.[2]

Sunset was wary of animus magic.[3] She seemed supremely uninterested by Fathom's introduction of Indigo, and complained about the food being served raw at the Island Palace.[4]

Sunset and Eagle were present at the party when the Royal SeaWing Massacre began. She and her partner toured the party and asked many questions of the SeaWings' culture. They were negotiating with Queen Lagoon when Sunset was impaled in the neck by Albatross's knife. Sunset's death spurred a treaty between the SkyWings and the SeaWings, which had involved gem payments and land rights, as well as the SkyWings keeping the massacre a secret.

"I guess we can set it on fire. Then perhaps it would be palatable."
― about the raw food during the SeaWings' party (Darkstalker, page 64)

"How does it work? […] Where does the water come from?"
― about the enchanted fountain of Queen Lagoon (Darkstalker, page 67) 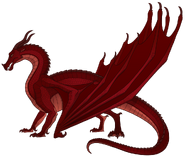