Wings of Fire Wiki
Register
Don't have an account?
Sign In
Advertisement
in: Article stubs, Characters, Males,
and 9 more
English

"I am useful, […] I have many uses. I am smart and I know things and I can fight HiveWings and I am in the Chrysalis, hello, which everyone seems to forget, secret revolutionary over here, and I am also, by the way, extremely good company."
— Swordtail to Sundew, The Poison Jungle

Member of the Chrysalis

The Hive Queen,
The Poison Jungle,
The Dangerous Gift

Swordtail is a male SilkWing introduced in The Lost Continent. Before becoming a fugitive, he worked in a construction crew under Grasshopper. He is a part of the Cicada Hive Chrysalis.

He is currently under the othermind's control. He is the brother of Io and is in a relationship with Luna.

Swordtail has dark blue scales with a small pattern of white triangles along his spine and snout.[1] He has dark blue eyes,[2] deep blue wings,[3] and a long, orange and blue tail.[4] He is dotted all over with orange splotches, as though someone melted a sunset in a cauldron and flung it over his wings. He is often covered in dirt, with fragments of treestuff caught between his claws and tangled between his long, elegant horns.[5] He normally wears a grim expression,[6] and is slightly bigger than Sundew.[7]

Swordtail is known for causing trouble, as he is a dragon with wild ideas who speaks a little too freely.[8] Blue considers his ideas as unpopular opinions.[9] He was placed in Misbehaver's Way several times before being assigned to a construction crew, a profession that is not highly regarded in Pantalan culture. Before becoming a fugitive, Blue often worried that Swordtail's rebellious ideas, such as believing that the SilkWings should have a queen of their own, or that the collapse of a Hive tower being caused by shoddy construction rather than LeafWing sabotage, were a bad influence on Luna. Blue described Swordtail to have "impulsive courage," and considers him one of the bravest dragons he knows. Other dragons often think Swordtail's ideas and plans to be long-winded and too optimistic.

Blue is one of Swordtail's closest friends, and they have known each other for a long time. They care for each other, despite having radically different views. Swordtail seems to be defensive of Blue, even going to the extent of fighting several HiveWing guards to allow him to escape.

Bumblebee seems to think that Swordtail is funny. When he told her to be quiet, she fell over giggling. More of this relationship is seen in The Poison Jungle. When she said "Snabble poof," she was likely referring to Swordtail disappearing in the Venus dragon-trap.

At first, Swordtail does not trust Cricket due to her being a HiveWing. However, once she proves to be on their side (and once he discovers she and Blue have feelings for each other), he begins to see her in a more positive light, complimenting her several times and listening to her points.

Io appears to support her brother, as she attended his girlfriend Luna's Metamorphosis on her own accord and helped his friend escape the HiveWings at her own risk. They were overjoyed when they found each other in the Poison Jungle, and Io appeared sympathetic when Swordtail became distraught over not finding Luna.

Swordtail and Luna seemed to be in a long-time relationship. He looks to her for guidance and seems indecisive and anxious when she isn't around, fretting about every decision and continuously saying that he wished she would help him. He cares deeply about her, fighting off multiple HiveWings on several occasions to protect her and her brother. He also refused to eat or sleep during his search for her. Swordtail believes that he will always find his way back to Luna.[10]

Although initially distrustful of her, Swordtail grew to find that he and Sundew shared many ideals, including the destruction of the HiveWing tribe. Swordtail agreed to follow Sundew once she revealed her plan to burn the Hives, sometimes referring to her as "the boss." Even when he has not entirely thought it out yet, he is quick to take her side, such as agreeing to destroy the Hives before Cricket reminds him of all the SilkWings that would perish. Sundew thinks he is slightly slow.[11]

"He didn't. I finished all my work and asked — yes, very politely, Blue, I promise — and he still said no. So I snuck off when he wasn't looking."
― to Luna and Blue (The Lost Continent, page 39)

"I just want to hurt them. […] I want them to feel what it's like to be powerless. I want them to be stabbed with nerve toxins and have their loved ones ripped away."
― about the HiveWings (The Hive Queen, page 37)

"Oooooo. […] That sounds super dangerous! Touch me not — or you will DIE!"
― to Sundew and Cricket, about Touch-me-nots (The Poison Jungle, page 10)

"I wouldn't say you have a flamesilk, […] I mean, he is a flamesilk and he's here, but he has himself. No one else has him, I mean. He is not for having. He's his own dragon!"
― to Nettle, Mandrake and Wolfsbane about Blue (The Poison Jungle, page 33)

"I am useful, […] I have many uses. I am smart and I know things and I can fight HiveWings and I am in the Chrysalis, hello, which everyone seems to forget, secret revolutionary over here, and I am also, by the way, extremely good company."
― to Sundew (The Poison Jungle, page 34)

"No, […] You guys burned down Bloodworm Hive, and good riddance. Good riddance to all of them."
― to the LeafWings (The Poison Jungle, page 41) 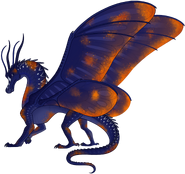