Wings of Fire Wiki
Register
Don't have an account?
Sign In
Advertisement
in: Citations needed, Characters, Females,
and 13 more
English

"Most dragons don't realize how much I can figure out from their tone of voice, or the little huffs they make between sentences. She thinks because I can't see her, I won't be able to tell when she's rolling her eyes or making fun of someone. Sometimes she'll sneak in and out of our cave, because she doesn't want to have to talk to me, and she thinks I don't notice."
— Tamarin to Sunny about Onyx, Darkness of Dragons

Tamarin is a female RainWing dragonet who was introduced in The Hidden Kingdom. Before attending Jade Mountain Academy as a member of the Gold Winglet, Tamarin worked as a flower gardener in the Rainforest Kingdom. She is blind and navigates her environments using other senses and a mental map of her surroundings.

When not displaying any particular emotion, Tamarin is shown to have blue-and-gold scales.[1] She has odd light blue eyes,[2] and several scars on her wings and neck, including one twisting across her underbelly.[3] She is small,[2] but larger than Pike,[4] and wore a garland of red, pink, and purple flowers around her shoulders[5] before attending Jade Mountain Academy. After the explosion in the History Cave, her scales were covered in bandages, and she wore a poultice of damp leaves tied over her eyes.[6] She has a limp[7] and several scorch marks across her scales.[8]

Tamarin is kind, quiet, and determined. In The Hidden Kingdom, she refused to let Glory down during her contest for the RainWing throne. Tamarin was hatched blind, but she never let her disability stop her from doing the same things as other dragons. She kept this mentality later on as well; after the explosion at Jade Mountain Academy badly injured her, she recovered quickly and refused to let her wounds stop her from attending classes or socializing with other students. She also never allows anyone to push her around. As shown in Talons of Power, Tamarin seems to prefer independence, as she probably feels pitied for something she doesn't want pity over, refusing Pike's offer to support her as she walked in the halls of Jade Mountain Academy. She is quite thoughtful and shy. Tamarin is also highly observant, being able to analyze others based on their actions.

Anemone has a crush on Tamarin. She casually shows up everywhere Tamarin is, offering to read her scrolls and leaving her small gifts of flowers or unusual fruit.[9] However, Tamarin does not seem to return Anemone’s affections, but still cares for her.[citation needed]

Kinkajou and Tamarin are good friends.[9] Tamarin shows concern for Kinkajou upon learning about her condition, saying that she wishes she could go to her. Tamarin thinks that Kinkajou is a little impulsive; however, she expresses that opinion in a way that indicates concern. Moonwatcher was sure to allow Tamarin to know as soon as Kinkajou was awake and healing.[10] Kinkajou cares very much for Tamarin's safety.[9]

Tamarin and Starflight appear to be on friendly terms, as Tamarin helped Starflight after he lost his sight. She taught him how to fly without someone guiding him, how to sense unexpected obstacles, and how to ask for help.[11]

"But who gets to decide what's a good thing? […] Dragons would always be asking for spells or telling you your choices are wrong. And sometimes it's hard to tell what's good and what's just easy."
― to Turtle about animus dragons (Talons of Power, page 25)

"It depends. […] For instance, an animus dragon might think, I'll make all our medicinal herbs appear magically in the healer's treehouse, so we never have to go looking for them again. That seems obviously good, right? But then we'd stop learning how to look for them, and we might stop experimenting with new ones to see how those might help dragons in different ways. We'd stop thinking about it at all, because everything would be too easy. Don't we lose something when everything is done for us?"
― to Turtle about animus magic (Talons of Power, page 25)

"So do I, normally. But I haven't been able to get the smell of smoke out of my nose since the explosion."
― to Qibli about her sense of smell (Darkness of Dragons, page 18)

"No, she's always nice to my face. Most dragons don't realize how much I can figure out from their tone of voice, or the little huffs they make between sentences. She thinks because I can't see her, I won't be able to tell when she's rolling her eyes or making fun of someone. Sometimes she'll sneak in and out of our cave, because she doesn't want to talk to me, and she thinks I don't notice. It's not personal though. I think she doesn't particularly care about any dragons unless they can help her get what she wants."
― to Sunny about Onyx (Darkness of Dragons, page 35-36) 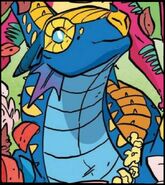 Tamarin from The Hidden Kingdom (graphic novel), by Mike Holmes

Tamarin's icon from Speed Wings, a minigame on Scholastic HomeBase
Art by Mike Holmes, from the Wings of Fire Graphic Novels