Wings of Fire Wiki
Register
Don't have an account?
Sign In
Advertisement
in: Characters, Females, SilkWings,
and 7 more
English

"Maybe he wants to join us. Do you dream of a better world, friend?"
— Tau to Swordtail, The Hive Queen

Member of the Chrysalis in Jewel Hive,

Tau is a female SilkWing who was introduced in The Hive Queen. She is a member of the Jewel Hive Chrysalis, and works as the Chief Steward for Jewel. She is in a forbidden relationship with Treehopper.

Tau has pale yellow and pale brown scales, like bananas and cashews mashed together. She has dark amber eyes,[1] pale yellow antennae,[2] and gold stripes painted on her claws. One of her back wings is misshapen;[3] it is smaller than the others and sticks out at an awkward angle, making it difficult for her to fly.[1]

Tau is rueful, and tries often not to hate her misshapen wing.[3] She is patient.[4] Tau appears to be soft-spoken and welcoming upon meeting Blue, Cricket, Sundew, and Swordtail. As a member of the Chrysalis, she dreams of a better future for her tribe. She is also brave, covering the others by revealing herself to Wasp. She also has a fair amount of compassion as she was crying when Sundew appeared and thus proved that LeafWings are not extinct. She has also expressed hatred towards her deformed wing, believing it makes her useless in fighting the HiveWings.

Tau first appeared arguing in Jewel Hive's library with Morpho and Cinnabar as part of the Chrysalis. She appeared to agree with Cinnabar that not all HiveWings were awful when Cricket introduced herself. When Sundew revealed herself, Tau approached her with tears in her eyes, saying she thought that all of the LeafWings were dead. Sundew awkwardly accepted the compliment (making Cricket feel somewhat envious), and Tau was revealed to have one small wing, likely a natural deformity. When Queen Wasp (in some HiveWing soldiers' minds) began trying keys to open the library, Tau was shown to lack the ability to fly as they tried to reach the book drop Cricket suggested as a hiding place. After Wasp ordered her soldiers to burn the library down if Tau and the others were not found, she and Cinnabar revealed themselves to allow the others to escape, claiming that they snuck into the library after hours to read. They denied Wasp's accusation of Blue and were then escorted away.

Later, when Cricket was attempting to escape from Lady Jewel's prison, Tau was one of the SilkWings to assist her escape. As the chief steward, she seemed to have respect from several other SilkWings as she and Cinnabar told them to help and say nothing about Cricket's escape. She also claimed to Cricket that whenever Wasp ordered their punishment, Jewel always gave them a medal. As the three of them left, Tau ran into Treehopper, her forbidden crush. Tau and Treehopper spoke for a while. Treehopper was then mind-controlled by Wasp before shaking it off awkwardly after she left.

Tau was later seen when Cricket came out of the nest and Blue led her to the stall they were in. Tau told Cricket that the SilkWing fixing a crack with Swordtail was part of the Chrysalis. As the group gathered their things, Cricket explained to Tau what she saw in the nest. Sundew advised Tau to keep the SilkWing dragonets and other flightless SilkWings away from Jewel Hive and into somewhere safe just in case the LeafWings were to burn the Hive.

Due to the gift of vision, Snowfall has a vision of Tau. Tau is first shown rolling antelope meatballs and worrying about Cinnabar joining the war, where Treehopper would be. Cinnabar is concerned that Tau would never survive with her damaged wing when Scarab came and inspected the meatballs. They debated about the herbs within the meatballs when Jewel brings the message that SilkWings are being mind-controlled by Queen Wasp. The three dragons discuss about evacuating the innocent dragons that have not yet been infected immediately; Tau soon runs out the kitchen to call every prisoner and uninfected dragon in Jewel Hive to the ballroom, thus ending the vision.

Cinnabar cares greatly for Tau's wellbeing, and they are very physically affectionate.[3] Tau immediately made sure she was alright after being told that SilkWings were able to be mind-controlled.[5]

She is in a relationship with Treehopper despite a HiveWing-SilkWing relationship being forbidden. According to Cinnabar, their feelings for one another are quite obvious.

"I'm sure your intentions are good, Morpho. But what if you've scared him away and he never comes back?"
― to Morpho (The Hive Queen, page 136)

"Maybe he wants to join us. Do you dream of a better world, friend?"
― to Swordtail (The Hive Queen, page 139)

"Oh, I see. You're trying to free someone, too. I'm sorry; I've never heard of anyone escaping the mind control."
― to Cricket (The Hive Queen, page 147)

"You're alive. I thought you were all dead. I thought we'd lost your whole tribe forever."
― to Sundew (The Hive Queen, page 151) 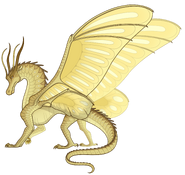