(This is the page for the book titled "The Hidden Kingdom." You may be looking for the graphic novel instead.)

The Hidden Kingdom, the third title in the first Wings of Fire arc, was published May 28, 2013, and features Queen Glory, the replacement RainWing Dragonet of Destiny, as the main protagonist.

The title could be referring to either the camouflaged RainWing village or the secret NightWing Island, both of which are the main 'hidden' locations in the book.

The dragonets visit most of the Kingdoms in this book, including the Mud Kingdom, Rainforest Kingdom, Ice Kingdom, Kingdom of Sand, and the NightWing Island.

The Hidden Kingdom follows The Lost Heir and precedes The Dark Secret.

Glory knows the dragon world is wrong about her tribe. After all, she isn't "as lazy as a RainWing" -- she isn't lazy at all! Maybe she wasn't meant to be one of the dragonets of destiny, as the older dragons constantly remind her, but Glory is sharp and her venom is deadly... except, of course, no one knows it.

When the dragonets seek shelter in the rain forest, Glory is devastated to find that the treetops are full of RainWings that no dragon could ever call dangerous. They nap all day and know nothing of the rest of Pyrrhia. Worst of all, they don't realize -- or care -- that RainWings are going missing from their beautiful forest. But Glory and the dragonets are determined to find the missing dragons, even if it drags the peaceful RainWing kingdom where they never wanted to be -- in the middle of the war.

For Elliot, born in a wonderful Year of the Dragon, like these books.

Quote on Back of BookEdit

Clay jumped up and clawed at his neck as well. Starflight's eyes went wide, and then he threw himself to the ground and rolled under the nearest low-hanging bush with his wings over his head.

"What in the world are you-" Glory started, ducking to look at him. She heard a soft buzz as something whizzed by her ear, followed by a tiny thunk as it hit the tree behind her.

She spun around and saw Clay literally disappear right in front of her. It was as if the forest reached out leafy arms, quietly wrapped him up, and bundled him away. One moment he was there, blinking dizzily, and then he was gone. A heartbeat later so was Tsunami.

The prologue began with the False Dragonets of Destiny, who were mentioned in the epilogue of The Lost Heir. They were as follows: Squid the SeaWing, Flame the SkyWing, Fatespeaker the NightWing, Ochre the MudWing, and Viper the SandWing. Nautilus and Morrowseer conversed, ending with Morrowseer deciding to train the dragonets personally, disapproving of what the Talons of Peace had done so far.

The dragonets and Webs were traveling through the borders of the Rainforest Kingdom. Before they had left the Mud Kingdom, they came across two  MudWings who somehow got murdered, who evidently were patrolling the border. As they progressed into the rainforest, Starflight noticed that Sunny was missing. One by one each dragon went missing, until Starflight hid and Glory, most luckily, dodged something, that turned out to be a tranquilizing dart, and that all of her friends had lapsed into unconsciousness. Glory ordered the mystery dragons, that still remained hidden, to show themselves. The "mystery dragons" turned out to be RainWings. Glory met the two of them, Liana and Jambu, who offered to take them to the village. While her friends were unconscious from the darts, Glory took her first sun time nap in the rainforest. When she woke up, she felt better, her scales brighter and more beautiful. Then she found a sloth lying on her back, which she eventually named Silver. Jambu then showed her the village, and they learned that they are related using a venom test. There she learned that RainWings didn't organize their eggs, she also learned that they didn't use their venom on any other living being. They returned to find their friends waking and they went to go meet Queen Magnificent. While waiting in line, she met Mangrove, a grumpy RainWing, who mentioned that his partner, Orchid, was missing along with at least twelve other RainWings. Bromeliad, a venom trainer, mentioned that a dragonet named Kinkajou had also gone missing. Glory suggested that they go to the queen together since they were both there about missing dragons. When Mangrove, Bromeliad, and Glory saw Queen Magnificent, Glory suggested someone investigate, and Mangrove said Glory should find the missing RainWings, and Queen Magnificent agreed. When Mangrove and Bromeliad leave, Tsunami, Starflight, Clay, Webs, and Sunny came in and asked them to help Webs, which Queen Magnificent was reluctant about. After some prompting from Sunny, the queen directed them to the RainWing healers. After they left the queen's treehouse, Tsunami, Webs, and Sunny headed off to the healer's hut, and Starflight and Clay joined Glory as she set out to find the missing RainWings. They spoke to Mangrove, and he lead them to a giant fallen tree. Glory picked up a horrible stink and asked Starflight if he could identify it, since he seemed to have a stronger sense of smell. They found a dying sloth by a stream, which Clay put out of its misery. Glory looked around and discovered an animus-made tunnel to the Sand Kingdom in a boulder. Starflight and Mangrove returned to the village, while Glory and Clay stayed to watch the tunnel overnight. While they watched, something came by, ate the sloth, and disappeared. In the morning, Sunny, Tsunami, Starflight, and Jambu arrived, and they discussed what to do about the tunnel. They settled on Glory and Clay going in with vines. When they went through, they found themselves in the Kingdom of Sand, within sight of Princess Burn's Stronghold.

Glory and Clay took a look around from the mouth of the tunnel's end in the Kingdom of Sand before returning to the rainforest. The dragonets and Jambu talked over the missing RainWings and the tunnel. Then Mangrove suddenly dashed out of the trees and into the tunnel, flying off to the Ice Kingdom to try and find Orchid.

After flying for the rest of the day, they settled down for the night in rocky terrain. In the morning, Glory flew ahead and saw Princess Blaze's Fortress, before seeing a NightWing assassin named Deathbringer settling down. Using an IceWing disguise based on Fjord, she questioned him on what he was doing. She secretly had a crush when meeting him.

Then Glory and Jambu, disguised as IceWings, went to meet Blaze who was staying at the Ice Kingdom. Deathbringer then attempted to kill Blaze after she was brought to the Dragonets. Blaze's neck was cut by one of the two "sharp silvery discs" and Tsunami's wing, after shielding Blaze, was also cut. Glory attacked Deathbringer when they heard the IceWings coming and took his weapons, using one to cut him somewhat. This made Deathbringer surrender. In fear of getting imprisoned again, the Dragonets left, with Blaze's neck bandaged. Later, when they returned to the rainforest, Glory was kidnapped by the NightWings. She escaped with the help of Clay, Deathbringer, and another captured RainWing named Kinkajou. When she got back, she told Magnificent about what had happened. Seeing that the NightWings had the missing RainWings, Magnificent refused to save them. As a result Glory challenged Magnificent to the throne.

Part Three: A Throne in the TreetopsEdit

The RainWings had a system of picking a queen without killing, where there were competitions for the throne. Magnificent and Glory each assembled their teams. Jambu and Exquisite competed in the tree gliding and Exquisite cheated, nearly killing Jambu. Tamarin, a blind RainWing, and Fruit Bat competed in the flower finding hunt. Tamarin won by finding the winning flower with her extremely good sense of smell. Glory and Magnificent competed in a camouflage contest, and Glory lost because Silver gave her away. Mangrove and Dazzling competed in a fruit scavenger hunt, and even though Dazzling cheated, Mangrove won by one point. The last contest was between Queen Grandeur and Kinkajou in venom shooting. In the first part, Kinkajou lost. However, in the second part, Grandeur accidentally shot at a sloth, and Kinkajou shielded it, so the venom hit her instead. Glory panicked and tried to do the venom test. This reveals she was related to Grandeur, so she successfully saved Kinkajou. Grandeur, who was the original queen, realized Glory was the rightful queen and forfeited, making Glory the Queen of the RainWings. Then, Clay crashed in and told her that Starflight had left and may have warned the NightWings that the RainWings would attack.

Fatespeaker and the false dragonets were upset in the Night Kingdom. There was no food, it was dark and smelly, and every one of her friends were fighting. Fatespeaker spotted some NightWings carrying an unconscious dragonet to the fortress. It was Starflight, and despite not knowing who he was yet, she had a feeling he was important. 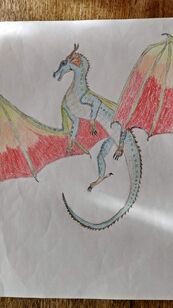 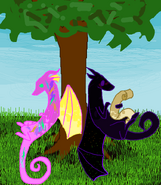 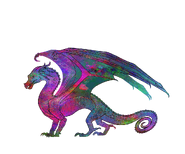 Queen glacier ripping the wings off a skywing described by Blaze in the third book. 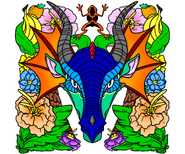 Start a Discussion Discussions about The Hidden Kingdom (Book)