Wings of Fire Wiki
Register
Don't have an account?
Sign In
Advertisement
in: Characters, Males, SkyWings,
and 8 more
English

"Can you teach us about Darkstalker today, please?"
— Thrush to Webs, Darkness of Dragons

Thrush is a male SkyWing dragonet who was introduced in Moon Rising. He is currently attending Jade Mountain Academy as a member of the Silver Winglet.

Thrush sat in the front row and gazed intently at Webs as he was teaching. He also raised one of his talons and spoke before waiting to be called on.[1]

Thrush was drumming during a music lesson with the Jade and Silver Winglets. Qibli took over the drumset quickly after entering the music cave, leaving Thrush looking bewildered.

He was later seen flying with Garnet and Peregrine.

Clay had gathered all SkyWings of the Academy to hear Peril's story of the duel between Queen Scarlet and Queen Ruby. Thrush is one of the SkyWing students.

Thrush attended a history class with the Jade and Gold Winglets. He was sitting in the front row and paid close attention to Webs as he taught. Thrush interrupted Webs' lesson about the Scorching to ask about the history of Darkstalker.

In the epilogue, Clay briefly mentioned that Barracuda, Ostrich, and Thrush were working on a presentation about the science of RainWing camouflage abilities. 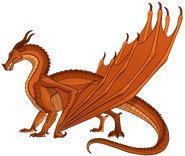