Wings of Fire Wiki
Register
Don't have an account?
Sign In
Advertisement
in: Citations needed, Characters, Males,
and 14 more
English

"I hate this war. I don't understand what we're even fighting for. Who cares who the SandWing queen is? I've never met Burn and I don't want to. Why am I fighting an IceWing over a throne that has nothing to do with either of us?"
— Umber to his siblings about the War of SandWing Succession, The Dark Secret

Umber is an adult male MudWing who was introduced in The Dragonet Prophecy. He was formerly a student at Jade Mountain Academy as a member of the Jade Winglet. His current whereabouts are unknown, as he is currently a fugitive alongside Sora.

Umber has brown scales[1] and pale amber eyes. He is the smallest of his sibling group, with a scar across the top of his snout.[2]

Umber is a caring, observant, and loyal dragon, and is very kind towards his loved ones.[3][4] He experiences a warm, constant sense of relief related to the end of the war.[1] He is incredibly loyal to and fond of his siblings, and thinks very highly of them;[4] he wants to protect them and keep them safe, regardless of the cost.[5] He was sympathetic towards Moonwatcher when she was interrogated about the truth of her NightWing abilities.[6]

Umber loves Clay; despite not being able to grow up with him, he loves him just as strongly as he loves his other siblings. He felt a "familiar feeling" towards Clay even before he knew who he was.

Umber seems to be attracted to Qibli; he thought of Qibli as gorgeous and wished he were his destiny.[7] He is worried about sounding like an idiot in front of him.[8] When he fled Jade Mountain Academy with Sora, parting with Qibli made him feel longing, heartbreak, and loyalty so strongly that Moonwatcher could feel it as a physical pain in her chest.[9]

Umber deeply cares for Sora and has a close bond with her; although he felt confused and betrayed when he found out Sora set the dragonflame cactus bomb, he told her he loved her anyway. Umber escaped from Jade Mountain with Sora and promised himself to keep her safe and to keep everyone else safe from her.[5]

Umber and Turtle were clawmates and close friends in Jade Mountain; they pulled their sleeping mats close so they could sleep with their backs against each other, as they often slept this way with their siblings.[10]

"I hate this war. I don't understand what we're even fighting for. Who cares who the SandWing queen is? I've never met Burn and I don't want to. Why am I fighting an IceWing over a throne that has nothing to do with either of us?"
― to his siblings about the war (The Dark Secret, prologue)

"Can't you smell it? We flew over part of it, too — it's pretty well hidden in the forest."
― to his siblings about a scavenger den (The Dark Secret, prologue)

"I hope we don't have to. I hope Clay fulfills the prophecy and ends the war quick and saves the world really soon, before we have to do any more fighting. Don't you think? Maybe he will?"
― to his siblings about killing other dragons (The Dark Secret, prologue)

"When do we eat? Just kidding. Pretending to be Clay."
― to the rest of the Jade Winglet and Tsunami (Moon Rising, page 84)

"This is my brother and sister. Marsh is really fast… you should see him fly. And Sora knows everything; she's the only one who ever practiced reading."
― to Kinkajou and Moonwatcher (Moon Rising, page 107) 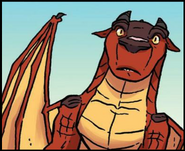