All the references I've done so far can be found over here!

What do you make your references with?

I use the transparent lineart for the tribes (check this page and the like for these images) and color it with a program that supports transparency and layers. Paint Tool Sai in my case, but anything along the lines of Gimp, Photoshop, Krita, etc works as well. Just copy the lineart, create a new layer below, and draw on that second layer. Don't use the bucket tool, that gets messy really quickly.

Can I use your references for my own projects/characters?

Feel free to use my refs without permission for anything involving the character in question (such as badges and the like). Credit is appreciated, but not necessary, within the Wings of Fire Canon Wiki, however please credit me if you use the ref outside this wiki.

Please don't use the reference for an original character though, either by straight up using the reference or by recoloring it fully or in part. Thank you.

Please check my message wall greeting for when requests will be open again. Can't promise anything anytime soon, but we'll see.

Why didn't you add (insert accessory/scar/etc) to (insert character)'s ref?

I did most of my refs about a year ago, using only the information on the wiki. This was pretty incomplete in most cases, so I'm currently working with one of the other admins to compile all appearance mentions within the books. I plan on redoing several references once we're finished with that and am most likely already aware of what you're pointing out, so please be patient :3

First Circle runaway lacking self-esteem, but will protect his friends with his life

Family: Icewolf (brother), a dead mom, and a father who believes him dead

Family: Some dead sibs, including his bigwings

Family: None that he knows of but an ancestor called Soulless

Family: The Royal SkyWing Family via who knows what relations

Assassin who enjoys annoying everyone

Family: A brother with a similar attitude, but less of an idiot

Family: Lost track of them during the war, ended up with Freeze instead

Gold-loving merchant cheating at games, trade, and everything else

Family: A brother who went to fight in the war. Hasn't heard of him since.

Hotheaded rebel fighting for the freedom of the oppressed. Mostly to boost his ego.

Family: A brother who doesn't really approve of his actions

Family: A noble line of IceWing generals... his sister's not one of those

Fierce if need be, but usually just cooking or enjoying cute animals

History nerd who knows too much... especially when it comes to RainWings

Family: Risktaker (brother), deceased. Doesn't like to talk about him.

Likes to sing but no one else does; blissfully unaware of danger

Fairytale-living romantic searching for her one true love

Family: An older sister much tougher and more realistic than her

Smells horrible but doesn't care because he can't smell a thing

Family: It's a mess you'd rather not get into

Uses dark humor to cover up his crippling fear of IceWings

Family: Parents desperately wanting him to be less of a goofball

Family: Almost-Bigwings of a group of sibs he loves very much

Animus with frequent use of magic. Nobody's sure if insane or just a weirdo

Family: A dad who's just like him, and a little sister who wants to be

Likes looking good and telling others they don't; actually covering up insecurities

Tiny but smart adventurer who loves riddles and outwitting others

Family: Platypus (cousin), and the rest of the Royal SeaWing Family

Family: A war-loving general for a dad

Family: A dad who shares his good looks

Smarter than average. Shares her sister's love for cute animals though.

Strong and not afraid to stand up against douchebags. Also loves tinkering.

Family: A mother who's very proud of her

R4dical kid with venomscales that destroy everything she touches. Kinda enjoys it.

Grumpy loner who's survived a lot more than his now dead friends. Blames himself.

Might look cute, but really doesn't mind gore or other messed up topics. Mostly harmless.

Family: Died during the war, all of them. She's gotten used to it by now.

Fast and reckless. Loves the extreme. No real empathy for anything serious.

Family: A mother who's given up on him at this point

Heat, one half of the unusual half-brothers

Frost, the other half of the unusual half-brothers 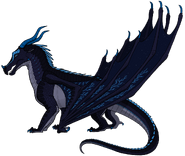