Wings of Fire Wiki
Register
Don't have an account?
Sign In
Advertisement
in: Characters, Males, NightWings,
and 11 more
English

"RainWings are too stupid and cowardly to be dangerous. Most of you know I got this when I grabbed their queen — well, turns out, just one of their queens — stupid tribe — and she had no idea what she was doing, or I'd be dead. They have Pyrrhia's most dangerous weapon and they're too pathetic to use it."
— Vengeance, ranting about capturing RainWings, The Dark Secret

Vengeance was an adult male NightWing who first appeared in The Hidden Kingdom. He was thrown into a lava pool for disobeying Battlewinner's orders.

Vengeance was large,[1] and had a horribly deformed snout: a twisting scar that closed one nostril, several melted scales, and oozing bubbles of deformed skin along his jawline caused by Splendor's venom.[2] He breathed in a loud, snuffly way[3] and had a hoarse, wet voice.[3] According to Fierceteeth, he was hideous even before his injury.[4]

According to Morrowseer, Vengeance would love to practice killing other dragons, and Quickstrike stated that he was unintelligent.[5] He was vengeful,[6] greedy and disobedient.[7] Vengeance is selfish, pushing away other guards to escape first. [8]

It was mentioned early in the book that RainWings were missing, including Queen Splendor. When the dragonets were searching for Orchid, they found a dying sloth with a nasty bite on it. Later, they heard something out at night that sounded like a monster. They heard bones crunching, then they found that the sloth was gone. Vengeance was the kidnapper of Glory and Queen Splendor. He is mentioned — though not by name — when Glory is taken to the NightWing island. When Glory is first inspected, a fellow NightWing states her worries, but Vengeance scoffed, saying that all RainWings were rotten and useless.[9] During his attempt to capture Splendor, she accidentally sprayed him with her venom, scarring his face and making him show an intense hatred for all RainWings.

He interrupted the council meeting where Starflight was being interrogated about the RainWings' plan. He then claimed that he knew more about RainWings than anyone else. Greatness accused him of disobeying orders by kidnapping Glory, even after Deathbringer had warned them not to. He rebuffed by explaining how Deathbringer allowed Clay to pass through the tunnel and had Deathbringer arrested. However, Queen Battlewinner decided that Vengeance must be executed for capturing Glory, and he was thrown into a lava pool. Vengeance struggled to escape, but the guards used spears to keep him submerged until he eventually burned to death. Later, Starflight wondered about Queen Scarlet and how she could still be alive, as Glory's venom did not hit her directly in her eyes. He noted that if she was alive, she would probably look like Vengeance.

When Fierceteeth, Strongwings, and Preyhunter were watching Queen Glory and Deathbringer, Preyhunter snarled that Vengeance was right about Deathbringer being a traitor.

Fierceteeth mentioned him when explaining that no one knew what RainWings could do, as it was not in any scrolls. Fierceteeth also mentioned that he was ugly even before he got sprayed in the face with venom.

Vengeance was one of the two dragons Deathbringer had to choose from to kill, in order to get permission to leave the NightWing island. When Deathbringer tracked him down to assassinate him, he was unable to check if Vengeance was sleeping in his cave or not due to two other dragons playing a game in the entranceway. Because of this, Deathbringer decided to kill Vengeance's cousin, Slaughter, instead. This was likely what brought Vengeance's hatred of Deathbringer.

Slaughter was Vengeance's cousin, and was kind only towards him.[10] Quickstrike believed that Vengeance would hate and try to hurt Deathbringer for killing Slaughter.[11]

"Bosh. All RainWings are the same. Rotten and useless."
― before taking Glory's gag off (The Hidden Kingdom, page 190)

"Yeah, I noticed, […] And yet I know more than any dragon about RainWings and what they can do. […] And I can tell you this was a fluke. RainWings are too stupid and cowardly to be dangerous. Most of you know I got this when I grabbed their queen — well, it turns out, just one of their queens — stupid tribe — and she had no idea what I was doing or I'd be dead. She didn't even mean to spray me. They never do. […] They have Pyrrhia's most powerful weapon and they're too pathetic to use it."
― about the RainWings (The Dark Secret, page 19)

"Deathbringer. […] Oh, yeah. How is your pet, Greatness? I've heard a very interesting story about him."
― to Greatness, about Deathbringer (The Dark Secret, page 19)

"This dragon, […] This pet assassin of Princess Greatness was actually conspiring with the enemy. He is the one who brought the MudWing here and he helped them both to escape."
― about Deathbringer (The Dark Secret, page 20-21)

"Yeah, I have witnesses, […] One of the guards she attacked on the way out saw you helping them. And the guards you distracted from the tunnel so the MudWing could come through — they can tell us all about that."
― to Deathbringer, after being asked if his accusations had any proof (The Dark Secret, page 21)

"Wait, […] What he did was worse! I just grabbed a RainWing, same as always! How could I know — she didn't look no different than the others!"
― when Princess Greatness declared his death (The Dark Secret, page 22) 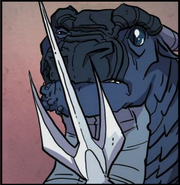