Wings of Fire Wiki
Register
Don't have an account?
Sign In
Advertisement
in: Characters, Males, SkyWings,
and 9 more
English

"Your Majesty, the facts are clear. You gave an order. Kestrel disobeyed you and fled the kingdom. She has been living under your mountains for the last seven years, aiding and abetting the Talons of Peace, who also refuse to follow Your Majesty's orders. She deserves a long, painful execution. There is no need to drag this trial out."
— Vermilion to Scarlet, The Dragonet Prophecy

Alive (as of Escaping Peril)

Vermilion is an adult SkyWing prince who was introduced in The Dragonet Prophecy. He was the announcer for the SkyWing arena before Queen Ruby's succession to the throne. He currently resides in the SkyWing palace.

Vermilion has bright red scales[1] and blood-red wings.[2] He towers over Ruby.[3]

Vermilion is shown as a former loyal supporter of Scarlet, but became devoted to Queen Ruby once he realized that she is a better queen. His loyalty towards Scarlet was born out of fear, likely from watching so many of his siblings die at Scarlet's talons - he switched allegiance to Ruby almost immediately after Scarlet's disappearance and ignored every single one of his mother's dreamvisitor messages to him. Once Scarlet returned, Vermilion half-heartedly obeyed her orders, showing that his fear of his mother still had a firm hold on him. Vermilion also seemed to be slightly ill-tempered, as he was irritated when his brother Hawk joked with Ruby.

Vermilion seems to have a lot of interests, having been an announcer in the SkyWing Arena and a prosecutor while Scarlet was alive, and showing an interest in owning a pet scavenger like Smolder's after she was gone.

Vermilion seemed to be relatively close to his sister Ruby, as he did not kill her as Scarlet demanded. He also preferred Ruby as queen over Scarlet.

Vermilion was loyal to his mother during her reign, which helped him to keep a stable relationship with Scarlet. She entrusted him with announcing arena battles as well as arguing for persecution. However, it has been shown that his loyalty sprung out of fear. He is ultimately more loyal to Ruby due to being a better queen.

Following the end of the war, he seems to have become somewhat friendly with Smolder — the two share an interest in keeping scavengers as pets.

"After four wins, Horizon the SandWing — formerly, and unwisely, a soldier in Blaze's army — has been challenged to a match with the Queen's Champion, Peril. Claws up, fire ready! Fight!"
― announcing a match between Horizon and Peril (The Dragonet Prophecy, page 130)

"After last month's battle with Blaze's army, our queen's dungeons were stuffed with IceWing prisoners of war. Only nine have survived. After two wins, I give you — Fjord of the IceWings! […] And in this corner, an unusual case — a MudWing, but not one of our allies. No, this dragonet was found hiding under our mountains, protected by the Talons of Peace. Is he one of the dragonets of destiny? Not if he loses this battle! […] If these prophesied dragonets are as wonderful and legendary as they're supposed to be, this should be a showdown to remember. I hope you're prepared to impress us, dragon of the mud. I present to you … Clay of the MudWings! Claws up, teeth ready! Fight!"
― announcing a match between Fjord and Clay (The Dragonet Prophecy, page 154-155)

"Your Majesty, […] The facts are clear. You gave an order. Kestrel disobeyed you and fled the kingdom. She has been living under your mountains for the last seven years, aiding and abetting the Talons of Peace, who also refuse to follow Your Majesty's orders. She deserves a long, painful execution. There is no need to drag this trial out."
― during Kestrel's trial (The Dragonet Prophecy, page 177)

"She turned your arena into a hospital, […] She pardoned all the prisoners and brought in doctors and healers from other tribes to teach ours everything they know and she made space for all the wounded soldiers from the war and she's been finding them all places to live and jobs to do and using the gold for all of that."
― to Scarlet, about Ruby (Escaping Peril, page 184)

"No! […] Never! You're the only good queen! I liked my arena job! It's absolutely terrible here now! We always loved the, uh, the fighting! We missed you so much!"
― to Scarlet (Escaping Peril, page 184) 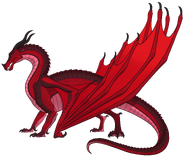