Wings of Fire Wiki
Register
Don't have an account?
Sign In
Advertisement
in: Citations needed, Characters, Females,
and 12 more
English

"Where have you been? We've been here for a whole day and a half and no one has checked on us or fed us anything but what appears to be leftovers from a meal three months ago."
— Viper to Morrowseer, The Dark Secret

Burned to death in a pit of lava

Viper was a female SandWing dragonet who was introduced in The Hidden Kingdom. She was a member of the false dragonets of destiny as a replacement for Sunny. She was killed on the NightWing island while in a battle training session with Flame, in which she fell into a river of lava during an attempt to kill Fatespeaker.

Viper had white-gold scales.[1] She had a brownish tail barb.

Similar to the other false dragonets, she was very annoyed by Fatespeaker's imprecise and false predictions and found amusement in bullying Squid. She seemed to also take pleasure in abusing Fatespeaker, nearly to the point of killing the NightWing, due to her hating all NightWings for taking her away from her family. She acted aggressively to anyone she met and usually kept to herself, but if anyone came too close, she would threaten them with her tail to scare them away. Starflight thought that Viper seemed like the exact opposite of Sunny.[1] She acted as if she would rather die than stay on the NightWing Island. She was very strong and could get angered easily.

"I hate that big old stupid horrible NightWing."
― to the other false dragonets about Morrowseer (The Hidden Kingdom, page 293)

"Where have you been? […] We've been here for a whole day and a half and no one has checked on us or fed us anything but what appears to be leftovers from a meal three months ago."
― to Morrowseer (The Dark Secret, page 72)

"Replace her? […] We can do that?"
― to Morrowseer about replacing Fatespeaker (The Dark Secret, page 73)

"Can't we kill her instead?"
― to Morrowseer about killing Fatespeaker instead of killing Starflight (The Dark Secret, page 75)

"Send me in, too! I want a chance to bite her! I can definitely kill her, just give me a chance!"
― to Morrowseer, requesting to fight (The Dark Secret, page 185)

"This is your fault! I could be back at camp with my parents if it weren't for your stupid tribe!"
― to Fatespeaker, about to kill her (The Dark Secret, page 187) 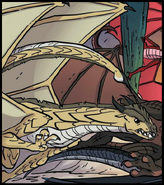