When Queen Oasis was killed by three scavengers (Heath, Rose, and Stone) near her own palace in 4991 AS, the Kingdom of Sand - and, later, the rest of Pyrrhia (excluding RainWings and NightWings for most of the war ) - was thrown into a war over the heir to the SandWing throne. The violence lasted for twenty years and included every Pyrrhian dragon tribe, with the exclusion of RainWings and NightWings. Soon, it became known that the NightWings took Blister's side. Along with the deaths of thousands of dragons, the war also caused much collateral damage. Sunny ended the fighting by finding the Eye of Onyx and giving it to Queen Thorn, marking her as the new SandWing ruler.

Listed below are the events that caused and were included in the War of SandWing Succession.

The Death of Queen Oasis

The war began in 4991 A.S. when Queen Oasis was assassinated by three scavengers, one of which Smolder had caught and believed to be named Flower, although her real name is Rose. These scavengers also stole a large amount of Oasis's treasure, including the Lazulite Dragon, and, most importantly, the Eye of Onyx. After her mother's death, Burn immediately drove her sisters Blaze and Blister out - or, according to some scrolls, they fled before Burn got a chance to kill them - and seized the stronghold. Upon claiming the structure for herself, Burn ordered extra-thick walls around the stronghold's original shape and, later, mounted the disembodied heads of enemies at the top of the wall as a warning to those who dared displease her. Then the War of SandWing Succession began as the three sisters battled over the throne of the SandWings.

Blister knew that she could not defeat Burn in combat, so she formed an alliance with the SeaWings and MudWings. Later on, a secret tie with the NightWings and favor from the Talons of Peace as leverage by having the "all-powerful" NightWings by her side was made. Seeing that Blister now had an army, Burn allied herself with the SkyWings, and tried to contact the IceWings, but they were already on a side. After the MudWings broke their alliance with Blister, Burn eventually won them (by using threats) over to her side.

Queen Glacier of the IceWings joined forces with Blaze, who promised Glacier a part of the Kingdom of Sand if she won. Blaze also had the support of many SandWings, although the tribe was still split between the three heirs.

To make it easier to understand, here are the princesses and their allies.

In order to get a better home for their tribe (they were at the time living on an active volcano), the NightWings hatched an elaborate plan. Queen Battlewinner and Morrowseer wrote a prophecy stating that five dragonets would be hatched to choose the successor to the SandWing throne. Once a queen was chosen, that queen would help take over the Rainforest Kingdom, along with the NightWings, in gratitude for the dragonets choosing them. The five dragonets were supposed to be a SandWing, a SkyWing, a MudWing, a SeaWing, and a NightWing, all to hatch together on the Brightest Night, with the NightWing being the "leader" of the prophecy dragonets.

Find the SeaWing egg of deepest blue.
Wings of night shall come to you.
The largest egg in mountain high
will give you the wings of sky.
For wings of earth, search through the mud
for an egg the color of dragon blood.
And hidden alone from the rival queens,
the SandWing egg awaits unseen.

Of three queens who blister and blaze and burn,
two shall die and one shall learn
if she bows to a fate that is stronger and higher,
she'll have the power of wings of fire.

Five eggs to hatch on the brightest night,
five dragons born to end the fight.
Darkness will rise to bring the light.
The dragonets are coming...

The Talons of Peace put five dragons in charge of retrieving the dragonets of destiny's eggs. They were as follows: Kestrel, a former SkyWing soldier; Webs, a former SeaWing guard; Dune, a SandWing deserter; Asha, a MudWing; and Hvitur, an IceWing.

Dune stole Sunny's egg from her mother, Thorn, and her egg was found in the sand. Webs' wife drugged the guards of the Royal Hatchery in order for Webs to get Princess Tsunami's egg. Asha paid her sister, Cattail, two cows for Clay's egg. Asha was later caught in a battle between Blaze and Blister's armies, and she made it out alive but died of her wounds shortly after delivering the egg. Morrowseer brought the NightWing egg-containing Starflight. Hvitur stole the Unnamed Characters#SkyWing egg from the SkyWings but was caught by Burn on the way out. Burn killed Hvitur and dropped the egg off a cliff, killing the dragonet inside it. Kestrel later found Hvitur's body and a few shards of the egg at the bottom of the cliff. Webs then went to the RainWings to get a replacement for the fifth egg. This egg contained Glory.

All other SkyWing eggs hatched on The Brightest Night, under Queen Scarlet's orders, were killed to stop the prophecy from occurring. Later on, it is discovered that Peril, a SkyWing born with too much fire, was the one that killed seven out of the nine eggs due to hatch on The Brightest Night by disintegrating them with her firescales when she was just a little dragonet (on Queen Scarlet's orders, when she was about one year old). The eighth egg, described by the guards as being "runty," escaped somehow, while Hvitur stole the ninth egg that was supposed to be burned, but it never hatched.

Escape of the Dragonets

Six years later, Morrowseer came to check up on the dragonets of destiny. He deemed Clay, Princess Tsunami, and Starflight satisfactory and Sunny okay, but was dissatisfied with Glory, as she was a RainWing instead of a SkyWing, and ordered her to be killed. They chained Tsunami up so she couldn't stop them. The other dragonets refused so to see Glory die, so Clay fled through the underground river, planning to free the others from the outside as Glory used her camouflage scales to hide. Tsunami escaped and caught up.

When Clay and Tsunami finally made it outside, they encountered Queen Scarlet of the SkyWings, who wanted to take them, prisoner. Clay and Tsunami attacked her and fled back to the mountain. However, Queen Scarlet and her SkyWing soldiers had followed the smoke coming from the cave that was meant to guide Clay. She killed Dune and took the dragonets and Kestrel prisoner while Webs escaped.

Around the time when the dragonets escaped, Blaze's army (IceWings and SandWings) attacked the MudWings, near Clay's siblings' village. It is hinted that the MudWings sent a message to the SkyWings for help, but Queen Scarlet refused because it would disrupt her hatching day festivities. The only named loss of this battle was Crane, one of Clay's siblings. However, there were many more, shown by the number of corpses mentioned on the battlefield.

Attack on the Summer Palace

During the Dragonets' stay in The Kingdom of the Sea, Burn's alliance bombed the Summer Palace. They were able to locate the palace because Crocodile, a Talons of Peace infiltrator, followed Webs there. The SeaWings fled to the Deep Palace, breaking their alliance with Blister.

Soon after, Nautilus, the leader of the Talons of Peace, and Morrowseer came up with set replacements, known as The False Dragonets. They were as follows: Ochre the MudWing; Squid the SeaWing; Flame the SkyWing; Fatespeaker the NightWing; and Viper the SandWing.

During The Brightest Night, Burn's forces, the MudWings, and the SkyWings planned to attack the IceWings. The idea was to "kill them all, take no prisoners." However, they decided not to after Sunny dreamvisited Queen Moorhen, her siblings, and many other MudWings. If the MudWings and SkyWings were to attack the IceWings, they would most likely be exterminated by the Great Ice Cliff. So the prophecy saved both tribes.

The Choosing of the SandWing Queen

On the false Brightest Night Sunny came up with an idea that the three SandWing sisters would choose one of themselves to be queen, peacefully or the SandWing tribe would choose; her plan didn't work out the way she intended.

The heirs and most of the tribes met up at Burn's stronghold, where Blister gave Burn a gift. It contained a Dragonbite Viper, which Burn pinned in her talons. Burn took a few steps toward Blister, hoping the viper would kill her, but a second viper leaped out of the box and bit Burn's ankle, killing her shortly afterward.

Blister then attacked Blaze, thinking that Blaze would never be able to fight back. Sunny then found the Eye of Onyx, buried with Queen Oasis, and gave it to her mother, Queen Thorn. Blister was angered and took the Eye of Onyx from Thorn, but the enchantments of the Eye of Onyx caused Princess Blister to be zapped into black dust.

Thus, Thorn was crowned the queen of the SandWings, ending the Great War. 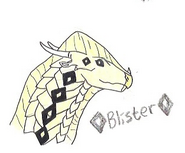 Blister, one the SandWing sisters (By Queen Clam) 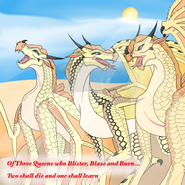 The trio who started it all, by Sahel

They still don't get along...

Start a Discussion Discussions about War of SandWing Succession