Wings of Fire Wiki
Register
Don't have an account?
Sign In
Advertisement
in: Characters, Females, HiveWings,
and 13 more
English

"Those tribes would have attacked me first even if I hadn't attacked them. If everyone is evil, the only way to survive is to be the most evil. SilkWings and LeafWings are different from us and need to be controlled."
— Wasp's thoughts, The Dangerous Gift

Stingers in claws and tail

Alive (as of The Flames of Hope)

Prisoner in the flamesilk caverns

The Hive Queen,
The Poison Jungle,
The Flames of Hope

Wasp is an adult female HiveWing who was introduced in The Lost Continent. During the Tree Wars, she attempted to exterminate the LeafWings and became ruler of the SilkWings alongside her HiveWing tribe. She could control almost all of her HiveWing subjects using the Breath of Evil, until it allowed her to control SilkWings through this ability as well. She previously ruled Wasp Hive, and is currently imprisoned in the flamesilk caverns alongside her sisters.

Wasp has black and yellow stripes,[1] black horns,[2] and deep, glittering,[3] dark,[4] large, and completely black eyes that are surrounded by an oval of yellow scales.[1] She is enormous, radiating menace,[2] and she has a chilly voice.[5] Some propaganda posters show her with stingers extending from her claws.[6] She also has a stinger in her tail, unknown to nearly everyone,[7] and with the only known use being for injecting breath of evil into other dragons. Her face was melted by Pineapple's venom.[8] She is also mentioned to have dark green blood, most likely due to her consumption of the Breath of Evil.[3]

Wasp is often simultaneously thrilled[9] and furious.[10] She is chillingly malevolent,[11] evil,[12] sharp,[13] dreadful,[14] and considers other dragon tribes to be dangerous, strange, and terrifying.[15] She has no sense of mercy or justice.[16] She believes the only way to be safe is through control, and her thoughts often spiral towards chaos, causing her to kill things in order to calm down. She thinks that everyone is evil and therefore she must be the most evil in order to survive.[17] She is vindictive and strikes back the moment she is struck.[18] The breath of evil describes her as all poison from the core out.[19] Scarab says that being perfectly nasty is Wasp's natural resting state.[20] She had no qualms against working with the othermind as she believes that in order to get the power she wanted, she would have to work with "monsters" to do it.[15] She showed a complete lack of care towards her subjects, as she was completely fine with abandoning Earwig on the island.[21] She preferred capturing dragons as opposed to killing them as she found them more useful as soldiers than corpses.[22]

Wasp thinks of Cricket as a traitorous HiveWing since Wasp cannot control Cricket, as well as Cricket stealing the Book of Clearsight alongside Blue and Sundew. After Cricket vandalized Jewel Hive, she threatened to "fix" Cricket.

Wasp thinks Jewel is stupid, annoying, and weak, and not a threat to her power, despite the fact that she could not be controlled. It is mentioned by Scarab that she has threatened to add Jewel to her Hive mind. Scarab also said that Jewel acted like a "vapid banana slug" whenever Wasp was around, most likely to keep Wasp from getting too suspicious.

Wasp controls Malachite and parades him past Scarab whenever she can, as punishment. She also threatened Cricket by saying that she would kill him.

Wasp and Scarab have an intense mutual dislike for each other. Wasp threatened to kill Scarab in The Hive Queen. Scarab wished for someone to replace Wasp as queen.

"What strange treason is this? […] Why can't I get inside your mind, worm?"
― to Cricket, speaking through the Librarian (The Lost Continent, page 211)

"No, […] it's all true. I can control all of them. That's why every dragon in the Hive is on their way to surround the temple right now. I can't move the guards you paralyzed, but I can reach everyone else. The moment you step outside this temple, they will kill you all."
― to Sundew, about her mind control through the Librarian (The Lost Continent, page 215)

"Oh, I see your game, […] I can take a lot more pain than a broken arm, though. I'm not afraid of anything you can do to this body."
― to Sundew, through the Librarian about the bullet ants (The Lost Continent, page 216)

"Come out, you sniveling cowards! I know there are dragons hiding in this library! Show yourselves, or I will burn all the books until you die choking on the smoke."
― to Cricket, Blue, Sundew, and Swordtail through a HiveWing (The Hive Queen, page 160)

"Then we'll have to throw you into it to slow the flames. You are a tedious talonwringer. I'll do it myself."
― through a HiveWing to a guard that asked what to do if the fire spreads (The Hive Queen, page 161)

"That was easier than I expected. You really were a fool to come back into a Hive. And for what? A little bit of graffiti, a few pamphlets that will be ash by evening? Poor naive little dragonet. As though anyone would believe you over their queen. It must have been so hard for you. Feeling so different, so alone. Watching everyone else come together in my Hive mind, but always left out. But I have good news for you, little dragon. You don't have to be different anymore. I can fix you. I'm on my way right now. And when I get there … I can make you just like everybody else. Aren't you lucky? See you soon, little problem dragon."
― through some guards to Cricket (The Hive Queen, page 215-216)

"That little worm Cricket is here, isn't she? […] The one who thinks she's so very clever, with her pamphlets and graffiti and rumors. Guess what, Cricket? I figured it out. I know who your father is. And he's mine, all mine, and I could kill him in a heartbeat if I wanted to. Or I could let you meet him. Would you like that? Wouldn't you like to come back to Wasp Hive so I … can …"
― through Inchworm to Cricket (The Poison Jungle, page 233)

"Everyone was out to get me but I showed them, and now they are all mine. This is what it means to be a true queen: complete control. Nothing to fear. No one to stop her or argue with her or complain about her. They fear HER, and that is how it should be."
― thinking about being a queen (The Dangerous Gift, page 178)

"She's only a puppet who can control some of the other puppets because she eats the plant and it combines with her venom in a useful way. [...] Anyway, she's only in charge of the HiveWings when he lets her be. She thinks she's his equal, but she is basically one of his big toes."
― Freedom, about Wasp's relationship with Cottonmouth (The Flames of Hope, page 234)

"There’s someone else we can’t see. [...] One with fire. [...] A lost flamesilk, perhaps? Luuuuuuna. Little flamesilk, are you here?"
― through a SilkWing about an invisible member of the stealth team (The Flames of Hope, page 42)

"Earwig … ah, yes, of Tsetse Hive. I’m inside your brothers now. I could have them kill each other so easily. Or perhaps this one could rip off the other’s ears. That would be entertaining. Perhaps if you ever want to see them again, you could try addressing your queen with more respect"
― through a SilkWing to Earwig (The Flames of Hope, page 47) 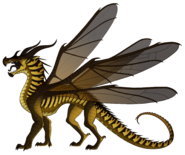